The kids are alright in revealing short doc

Charlotte Regan takes us behind the scenes of her sweet, insightful short doc, No Ball Games, which gives us a glimpse into the lives of children living in underprivileged areas of the UK and how they spend their leisure time.

A new short documentary film from Knucklehead director Charlotte Regan is a brilliant glimpse into the lives of a group of children from different parts of the UK and what they get up to when left to their own devices.

Regan wanted to make No Ball Games because, much like the projects in America, British council estates and social housing have certain stigmas attached. However, Regan, who grew up in such an environment, has spoken about the great upbringing you can have in those worlds and about how you can grow up having no idea that you have less than other kids; "You get to run around in those safe community environments every day with your friends. You get endless freedom and time to create your own fun," she says.

Maybe [this] sounds like artistic bullshit, but I just wanted to make something that was totally immersed in [the kids'] world and perspective.

This documentary, which is exclusively hosted on the Guardian newspaper's channels for the moment, highlights that freedom and the kids who often raise themselves. They can sometimes have unsupportive home environments, and No Ball Games shows how they find their support system amongst their friends within that social housing.

Below, Regan discussed the making of the film, how she found the kids who star in it and why it was important for her to make it.

Can you tell us a bit about the inception of this film and why you wanted to make it?

I guess I have always found that kind of age magical. The period where you don't know that you have less than other kids. You hear about their two-week holidays abroad during the summer, and you are sat chilling with your friends thinking, ‘yea that sounds rubbish, we've been playing out and making up games all hours of the day’. I'd always wanted to make a film that was just with the kids... maybe that sounds like artistic bullshit, but I just wanted to make something that was totally immersed in their world and perspective. I don't know if we have achieved that with this film, I'm not trying to claim that, but it's what drove me to make it, I suppose.

Did you recognise yourself and your own childhood in the kids who participated, and how did that affect the way you approached the film?

For sure. I hope everyone can recognise a bit of their childhood in it. From early on I knew I was going to just be a kid for the duration of the film. That I was going to go back to childhood and just spend the shoot being a part of it all. It probably meant I approached it like more of an adventure than I did a film, so no doubt caused some story/narrative issues later down the line with a lack of direction from me. Above: Charlotte Regan on location during the filming of No Ball Games.

How did Michael Fassbender's production company get involved and what input did it have?

I have been working with Theo [Barrowclough, producer] from DMC on my long form work for a while now. He is involved in every aspect of this film. He is there with me, calling up youth centres and pitching the project/finding the money, he's there every day of the shoot. He's there helping in the edit; it’s like Batman and Robin. And the combination of him and the legends at Knucklehead, who are unconditionally supportive of mad, long, tiring ideas, and forever there to offer support and creative advice, is the best. I couldn't ask for two better homes and filmmaking families.

The kids are all so comfortable in front of the camera and full of personality; what was the process in finding the right children to participate?

A lot of chatting, a lot of help from amazing people all over the UK; youth workers, casting directors, everyone. We didn't really have the money to do trips around the UK prior to the shoot to meet everyone, so lots of phone calls and chat and casting tapes. 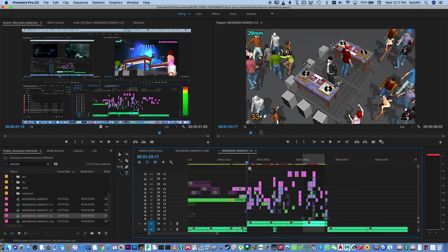 Above: Regan with some of the children from the shoot.

Were they immediately comfortable around you and the camera?

It, for sure, took a bit of time for them to get used to us. And I think a lot of that is down to my DP, Arran [Green]. He's amazing, but he's also got this personality that just adapts so well to working with kids - he'll have a right go at me for pretty much admitting he approaches everything with a kind of childlike glee and excitement that I think is really contagious.

I always wanted it to feel like the camera was just one of the gang. I didn't want it to feel like it was some precious, curated frames of art. I wanted it to feel rough and ready and like we were running wild with these kids. And the combo of me, Arran and Theo luckily made that work. We were so down to spend the summer eating sugary sweets, getting muddy and playing five-a-side in tiny playgrounds. Luckily, that meant we (and the camera) were just one of the gang!

Their personalities are very different; Seren and Seren are quite philosophical, while Declyn is quite cheeky; was it important to have that mix of outlooks?

For sure. We filmed a lot more characters than you see in the final film, so it was a lot of working that kind of stuff out in the edit. Seren and Seren were always, naturally, the voice of the film. They were the kids that just put everything into words, they were chatters, where characters like Declyn expressed it in more visual ways. 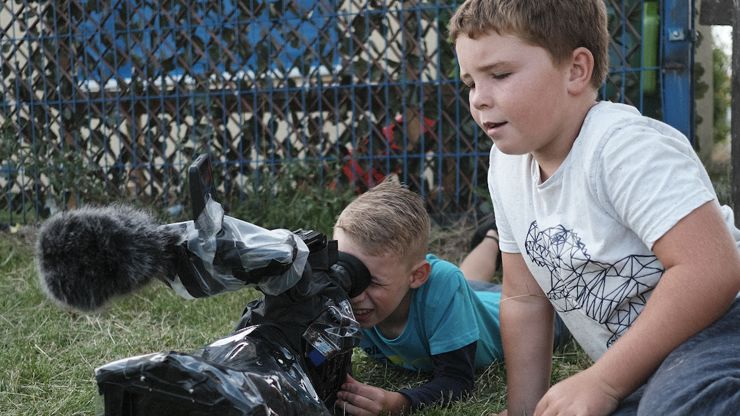 Above: Declyn [in the white t-shirt] and Seren and Seren are at the heart of No Ball Games.

The film, quite early on, features a fairly shocking pronouncement by one of the kids who says his father told him not to have any children because "children are annoying and ruin your life". The rest of the film plays out without adults; was that to show that it's often adults that are the annoyance for children?

I suppose it was to show that these kids are having all these defining moments amongst friends. They are working the world out in their groups of friends. I wanted it to feel like we were in their world. And in their world I think you just focus on your mates and the games you're playing. I wanted to feel that same sense of freedom.

I've always done narrative/fiction, so it was definitely a challenge to carve out a story [in the edit] with the footage instead of doing that beforehand with a script.

The edit was tough. The editor, Owen [O’Sullivan], is a legend, but I've always done narrative/fiction, so it was definitely a challenge to carve out a story with the footage instead of doing that beforehand with a script. Just the freedom of having hours of footage, and it being able to be 100s of different films, was mad.

What did the film teach you about kids in these communities that you didn't already know?

I had totally forgotten about the kind of magical way kids look at the world. I know I said that was my main reason for making it, which is true, but that doesn't mean I really understood it. This was a process of understanding that. Understanding those tiny moments that really define and shape you. I suppose it was remembering as much as it was understanding. Jeez, I’m sounding like a right arty filmmaker now.

What was the Guardian's involvement and what, if anything, did they want from the film?

They have been involved from treatment stage, and have been legends. It was supported by the Guardian and the BFI Doc Society, and both of them just wanted to make the best film possible from the start. They've given us notes through the process, and the notes were always given with a total understanding of what we wanted to achieve with the film. Everyone was on the same page from the off, which kind of feels odd! Usually it’s one of us expecting Harry Potter and the other expecting Fish Tank vibes. Luckily not with this!

Everyone was on the same page from the off, which kind of feels odd! Usually it’s one of us expecting Harry Potter and the other expecting Fish Tank.

What do you hope the film will achieve?

I don't know, really. It’s probably boring of me to say I never really think much about that. I don't think I'm out here changing the world with my films. But, I suppose I hope it helps people have a deeper understanding of kids from different backgrounds.

How an animatic can be authored anarchy

Keith Schofield's jaw-dropping, idea-packed, digital-puppeteering music video for Duck Sauce's Mesmerize was released at the weekend onto an unsuspecting audience. We caught up with him to talk appropriating celeb's heads, questioning the existence of reality and journeying through an army of anuses.