Please sir, can we have some respect? Tackling the problem of changing men

Recent, tragic events have brought to the fore the question of women's safety but, argues Amy Kean, well-meaning ad campaigns are not enough; sometimes too much trying means there's not enough doing. She explains why women's battle for respect is such a hard one, and how advertising can really help in the fight.

At one of my old agencies, we had a ritual called Fresh Eyes. Sounds lovely, right? Cleansing! Perky! Fresh!

But its name was the only pleasant thing about Fresh Eyes. Fresh Eyes meetings were brutal. For any team working on a pitch or important client project, Fresh Eyes was par for the course. You’d see the diary invite slip into your inbox like a yellow-bellied sea snake. Oh no, you’d think. It’s coming.

And when Fresh Eyes came around at, say, 5pm on a Thursday, you’d walk into a room so silent the drumroll of your own manic heart was not just audible, but deafening.

“WHAT ARE FRESH EYES, FOR GOD’S SAKE WOMAN?” you scream at me, the words hurtling from the back of your lungs and the pit of your guts, teeth snarled like a werewolf at the end of a seven-day juice detox, which is scary but still more appealing than any Fresh Eyes I’ve attended.

Fine, I’ll tell you. Fresh Eyes was the place we were normally told: “I’m sorry, but this isn’t good enough.” And what’s more heartbreaking, more exhausting, more terrifying than being told your work isn’t good enough, that you haven’t cracked it yet? What’s scarier than really honest honesty?

God, I hated it. But Fresh Eyes did me a favour. I have a weird, masochistic love of critique these days. For the kind of painful, constructive feedback that only someone who cares can deliver. Feedback from someone who cares is a gift.

The most important thing a Good Guy can do is no longer be a bystander in the face of widespread harassment and abuse of women.

So, now, my friends, is the time for Fresh Eyes.

In society, and in the ad industry, we’re currently having conversations about the lives and deaths of women. Er… a teeny bit overdue, isn’t it? Ha! But yeah, we’re having them. In chronological order, the case of two murdered sisters, Nicole Smallman and Bibaa Henry, whose bodies featured in selfies taken by the police; the disappearance and death of Blessing Olusegun, who was discovered on a beach in East Sussex last September; and the alleged murder of Sarah Everard by a police officer a few weeks ago; each devastated their families and friends. Let’s start there. 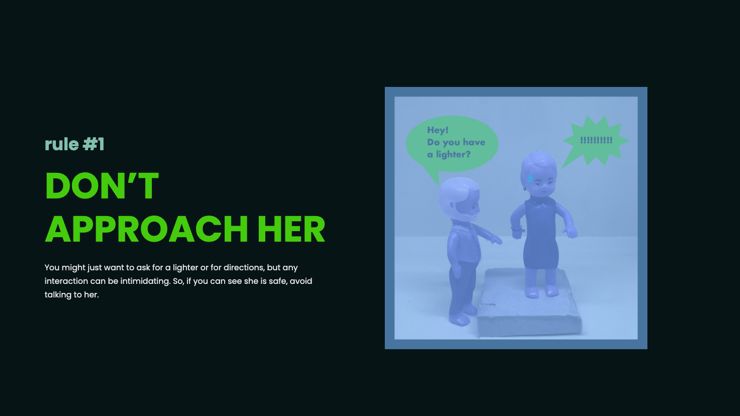 Above: Images from the Guide for Good Guys, released in the wake of the killing of Sarah Everard.

The events sparked conversation on social media, albeit to different extents, and there was an almost-immediate ad campaign. M&C Saatchi, along with Token Man and Solace Women’s Aid, last week released a Guide for Good Guys. Described as “a set of minimum social standards for men to follow in the interests of making our streets a safer environment for women”, the guidelines were thus:

For me, the most important thing a Good Guy can do is no longer be a bystander in the face of widespread harassment and abuse of women (97% of women in the UK have been sexually harassed). I think the campaign was well meaning. There’s nothing wrong with it. No one was harmed in the making of this ad campaign. They were trying. But also, it won’t work. Sorry.

The campaign was well meaning. There’s nothing wrong with it. But also, it won’t work. Sorry.

Ad campaigns and open letters and big initiatives and rainbow logos and press releases and hashtags all raise awareness of issues. Right now, we’re raising awareness of women feeling unsafe and being attacked on the street. Awareness can’t hurt… can it?

Actually, it can. It can hurt quite a lot. Above: The gender pay gap has remained unchanged and the amount of women working within the industry has dropped.

Let me explain, using examples. There’s been some recent announcements that didn’t get as much attention as they deserved. According to the latest IPA census, the gender pay gap is basically the same as it was last year. No improvement. And the amount of women working in our industry has gone down. This despite all manner of initiatives and awareness-raising exercises about FEMALE EMPOWERMENT and EQUITY.

If you critique these big initiatives, you’re being negative, or contrary, or toxic. If you give feedback, you’re not helping.

In addition, NABS’ TimeTo initiative, launched in 2019, was established to tackle sexual harassment in the ad industry. Of 273 signatories I heard this week that only seven of them have completed the specific training that NABS offer. Similarly, there’s been a lot of mental health awareness campaigns in the last few years, telling people to talk. Big initiatives, everywhere. I’ve spoken about this before, here and here. I’ve also looked at the Office for National Statistics data, and deaths in the UK from suicide continue to increase.

So, yes, awareness can hurt if there’s too much self-congratulation and not enough action. Awareness campaigns create an illusion of doing, accompanied by a microsite no one will ever visit. I understand that 'raising awareness' is easier than doing the work and having difficult conversations. I co-run a successful DEI organisation: doing the work is hard, and time-consuming, and I know not everyone wants to make that commitment. But the ad industry appears to be fostering an environment where Fresh Eyes aren’t allowed. If you critique these big initiatives, you’re being negative, or contrary, or toxic. If you give feedback, you’re not helping. But if we’re not being brutally honest then, let’s be honest… nothing will change. 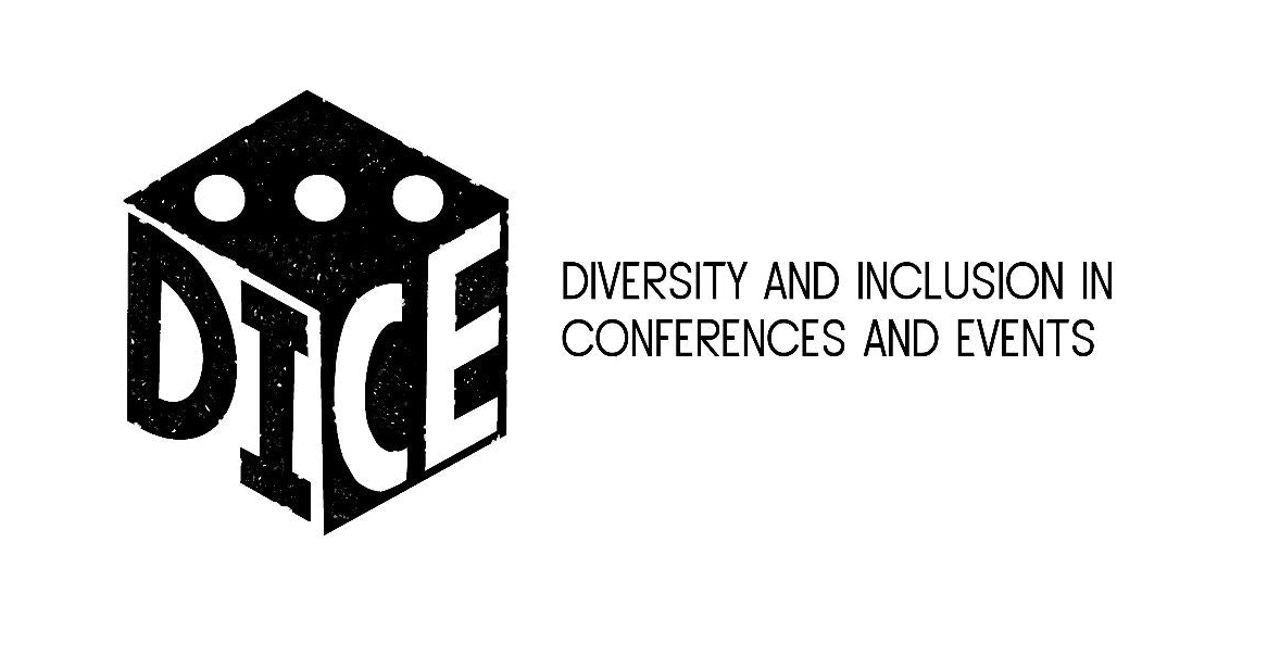 Above: Awareness is useful, but doing the actual work, like running the Dice Charter, is hard and time consuming.

Look, I know people are trying. I know they mean well. I know they want to help. But this isn’t good enough. Begging men to do the bare minimum and asking nicely isn’t going to stop women getting attacked on the street, or being sexually harassed. A lot of men didn't believe the Good Guys campaign applied to them. So, self-proclaimed Good Guys don’t want to be the target audience, and Bad Guys aren’t going to let a poster tell them what to do.

In many normal social groups, it’s encouraged to be a creepy predator.

We’re talking to men, here! Men who are geniuses. Men who get the top jobs. Men, who run the world. Men, who get paid more. And they don’t know how not to intimidate women in the street? When it comes to changing behaviour, insights need to be real and they need to be uncomfortable. And here’s the insight: it’s still socially acceptable for men to be predators.

In fact, in many normal social groups, it’s encouraged to be a creepy predator. We live in a society that until recently bought 16-year-old girls with their tits out on page three of a national newspaper, and which thought it appropriate to ask a young Britney Spears if she was a virgin in TV interviews. Above: Language describing women as prey is still widespread.

Language describing women as ‘prey’ is still widespread, especially in music. In 2017, Melissa Burkley Ph.D. conducted a psychological experiment. She asked men and women of varying ages to read a passage that described a man on a first date with a woman. Half read a normal passage, and the other half had a passage littered with men-as-predator and women-as-prey metaphors. For example, instead of referring to 'a night on the town', the metaphor version said, 'a night on the prowl'. And rather than saying he 'enjoyed the get-to-know-you phase' of dating, the metaphor version said he 'enjoyed the chase'.

When something is socially acceptable, asking nicely won’t work, but peer pressure related to social norms will.

After the reading, all participants were asked about their views on rape. There was no difference between the women who’d read neutral and pre-based passages. Men who’d read the metaphor-heavy passage were significantly more likely to align with views that perpetuate rape (ie. women who are raped while drunk or sexily dressed asked for it; if a girl doesn’t fight back it's not rape; women often lie about being raped) than the neutral reading. They were more likely to say they’d rape if they could get away with it. When it comes to men, this stuff’s contagious.

Get men to tell men that creepy behaviour is unacceptable.

When something is socially acceptable, asking nicely won’t work, but peer pressure related to social norms will. This is what we need if we want to see change: To adopt a guilt-ridden approach like that of organ donation. Or shame, like the drink driving ads, in which the drivers were positioned as murderers.

Get men to tell men that creepy behaviour is unacceptable. That if you treat women badly, you are disgusting, you are weak, and will be ostracised. Make it shocking, memorable, and if you have to, make it funny. But make it uncomfortable.

Now that I can see working. Who wants a Fresh Eyes?