Representing your country on the Olympic stage is a dream a huge number of athletes aspire to. But what happens if you have no country to represent?

To mark World Refugee Day, Swiss sportswear company On launched and co-produced an epic documentary to commemorate the millions of forcibly displaced people worldwide. Grown to feature-length through the tenacity of Hungry Man Richard Bullock, Run spans eight countries in three different continents and tells a story of displacement, commitment and hope.

Filmed over the course of three years, and incorporating global-plot-twist of the hit and fallout of the coronavirus pandemic, the film maintains a legitimate journalistic drive, despite the brand-involvement, and does the perfect 'branded entertainment' (though the creators might argue the term) job of being genuinely compelling and leaving you with admiration for the story's subjects as well as the company that made it possible.

We caught up with Bullock, with the help of The Humblebrag's Jessica Hartley, to discuss how it grew from a short branded promo, what the stories and friendships that have grown from it have meant on him. 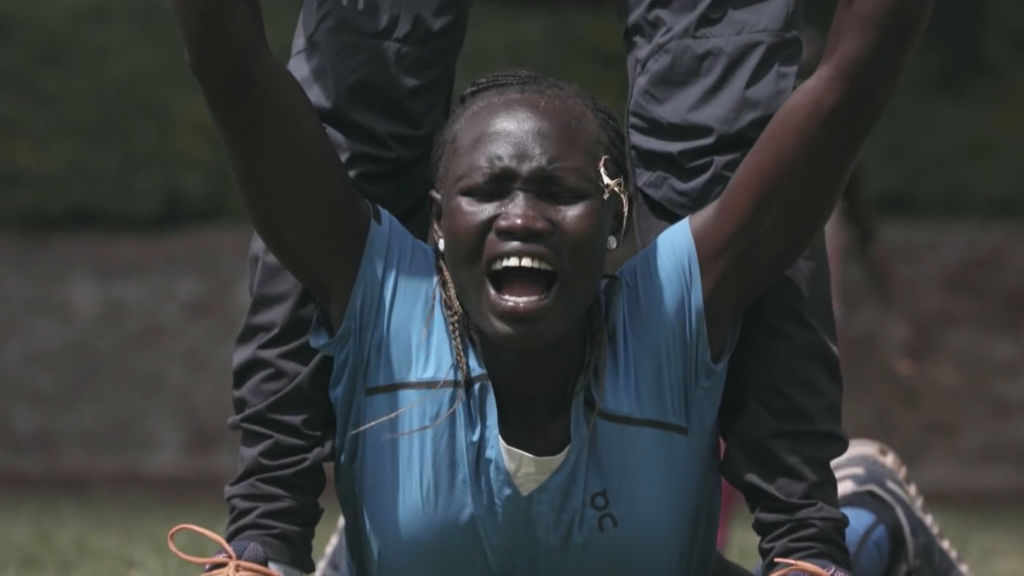 How long did the process take? What were the first steps?

I was asked by Feliciano Robayna, the Head of Sports Marketing at On and Executive Producer on the film, if I wanted to shoot a short promo for ON running in 2017 for the Athlete Refugee Team based in Kenya. While I was doing that for them, I started conducting interviews and shooting events as I saw them.

I made a short film off the back of it and started trying to pitch the idea of making a feature documentary about the team. However, not many people are that interested in films about refugees. But it was nagging at me, so I felt compelled to keep pushing.

Not many people are that interested in films about refugees.

We shot some stuff in London at the World Championships, thanks to backing from my production company, Hungry Man, and then I was going to film at the Commonwealth Games in 2018, but the team was refused entry by the Australian government. By then the story was starting to change and became really fascinating.

We pitched the idea of a feature film to ON and after some time they agreed to co-produce the film. 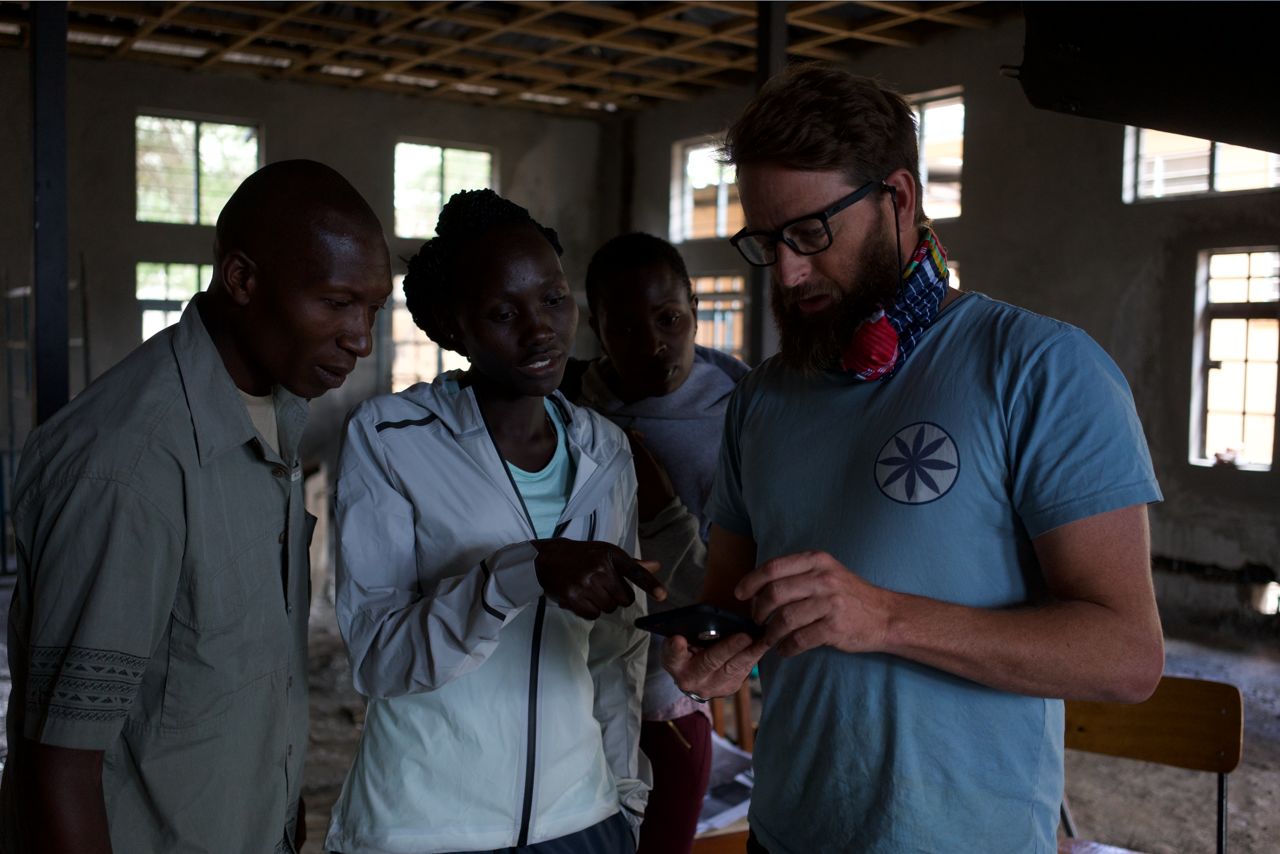 Above: Richard Bullock with athletes.

Did it feel like you were making branded content whilst shooting the film? How much on an input did ON running have?

On’s founder Olivier Bernhard said that the film is a gift to Tegla Loroupe and the Athlete Refugee Team. I feel like that as well.

The production was a partnership between ON, Hungry Man And myself. On is the team’s equipment sponsor. The idea grew from the short I made and it was conceived as a feature documentary, but the intention was always of it being independent in its nature. So, in that sense it was never made as a piece of branded content. I guess ultimately that’s up to the audience to decide.

We all felt that the subject matter and sensitivity of the story meant it’s not appropriate to make it with any other intention than to tell the story of the athletes. This was how it felt for me and I had to trust that On were with the film for the right reasons.

On asked for no specific branding or presence other than the equipment the athletes use inherent in the scenes.

I have to say they more than lived up to their side of the project. As the team sponsor they had unique knowledge and insights about the team and I couldn’t have made the film without them. It was an amazing production for all involved. Made with a shared love of the team and a desire to bring their story to the world.

On asked for no specific branding or presence other than the equipment the athletes use inherent in the scenes.

However, it’s not fair to say they had no involvement, because they were involved as partners in making the film. They have deep knowledge of running and athletes and we collaborated a lot regarding the story and personal lives of the people we were filming, but they gave me final cut and trusted me throughout the process. They were very giving and generous.

Actually, I think it was unlike any brand and director relationship I’ve ever had. On are a pretty innovative company and I don’t think it’s that hard for them to structure relationships in new ways. Well that’s how it felt to me. I had the freedom to find the film but their full support and insight when I asked for it. It was a really good relationship.

Whenever I had questions or hit roadblocks, which does happen on a three-year production, Feliciano Robayna from On would say calmly to me: “we trust you.” 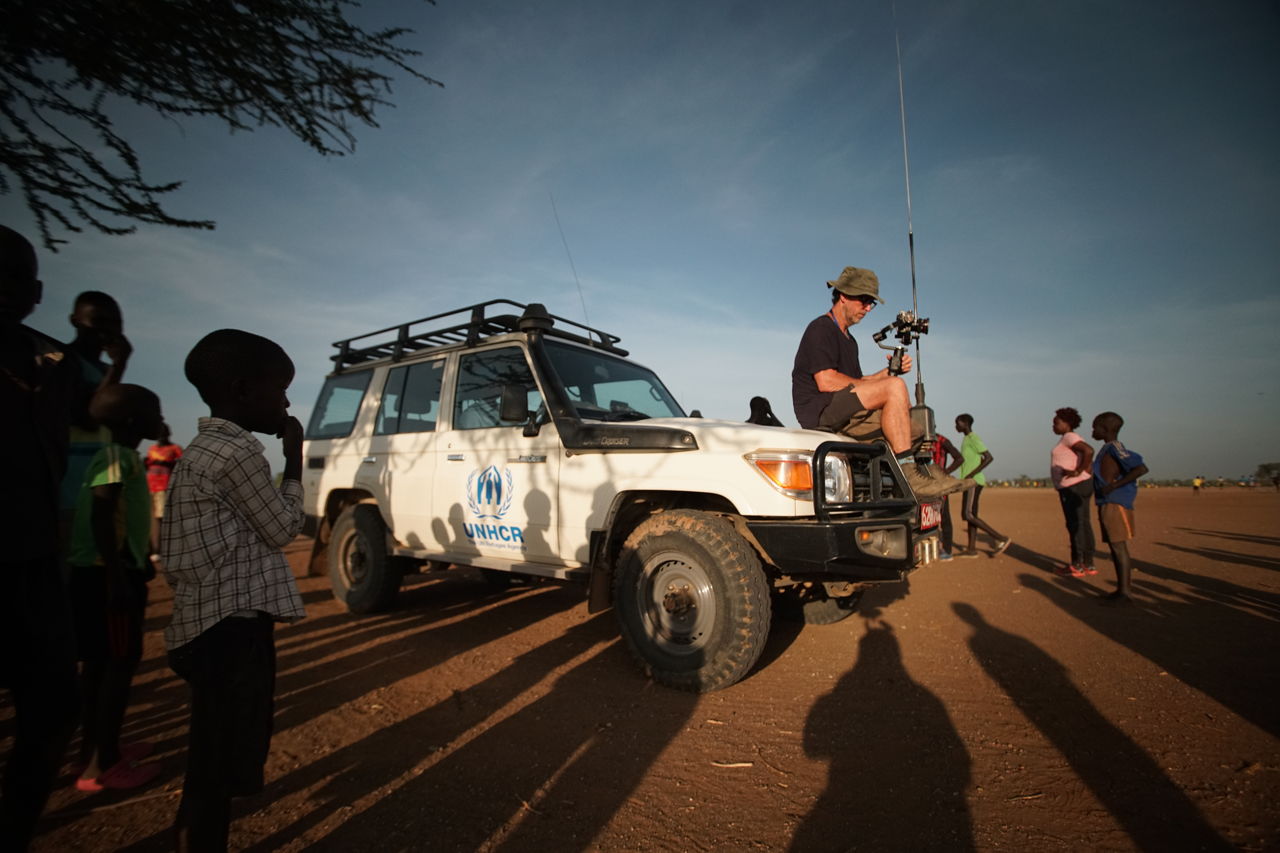 Above: DOP Peter Eastgate at the Kakuma Camp.

How did the film impact your own perception of refugees and the differences between people?

The main thing I learnt is that coming from a country is a real problem.

If you look at the Earth from space there's no lines or flags. Just Earth.

If you look at the Earth from space there's no lines or flags. Just Earth. We’d probably have a much more harmonious planet if we just dropped the whole idea.

Most of the lines were drawn by long dead monarchs or failed colonial states anyway.

The majority of the athletes in the Nairobi training centre are from South Sudan. There are about 63 distinct ethnic groups there. Totally different languages. They identify as Nuer, Dinka or Didinga. 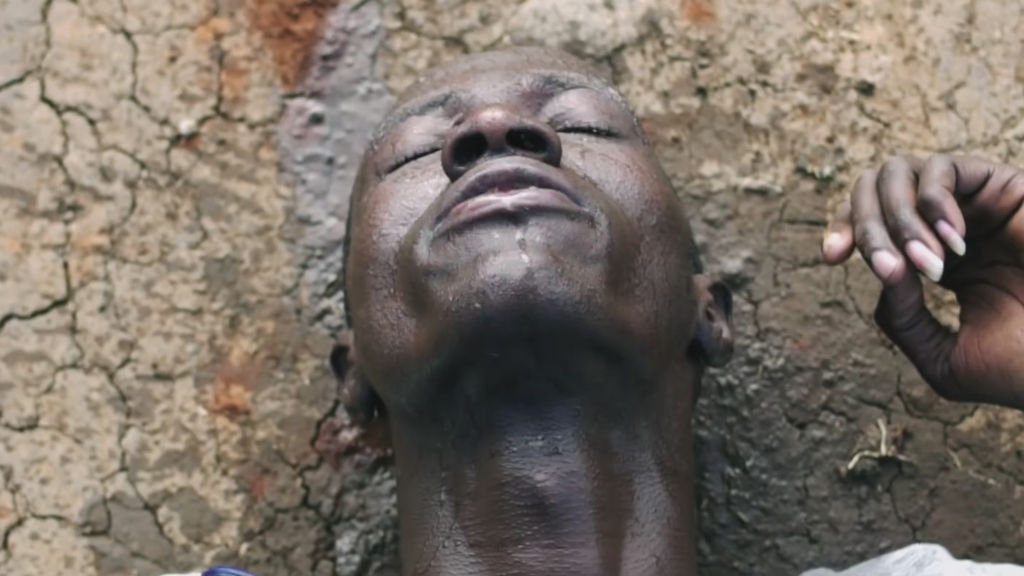 Which countries did you shoot in?

We shot in Kenya, in Nairobi, Ngong Hills and in NW Kenya on the border of South Sudan. And also, in England, Denmark, Japan and Switzerland.

Then, once coronavirus hit, I started directing the athletes to shoot things for me in the refugee camps and wherever they were around the world.

So, there’s footage I directed from my garage in Sydney shot in Kenya, Switzerland, Germany and Israel.

What kind of deeper insights has this given you on the world and on politics?

The film isn’t really my point of view.

Refugees get a lot of people talking for them so I made a conscious effort to allow the audience to listen to the characters. They are all in their early 20s but they are incredibly wise and thoughtful.

It’s not about running at all; it’s about resilience and overcoming hardship.

From very early on I tried to find out how they were able to remain so hopeful and positive about the world when the world had given them little reason to believe it was anything but violence and horror. I mean these were six and seven year old kids who saw their parents and siblings murdered in front of them and then ran away to avoid the same fate. How do you reconcile that as a human being? And somehow they do.

They are very kind people too. Very giving. I learnt an incredible amount about coping with difficulties from them and facing uncertainty.

I think that’s the biggest plus for someone watching the film. It’s not about running at all; it’s about resilience and overcoming hardship.

There’s lessons in it for everyone.

What results would you like to see from this film?

The team sponsor, ON, really wanted to do the premiere on June 20, for World Refugee Day.

I’m so happy they pushed for that.

They’ve already decided to raise money and build a training track in Ngong for the team.

The most important goal for me is for people to see the refugees as people. As individuals with names.

At the moment they have to walk or run 5k to get to the nearest training track. Half the Athletes are women, so it’s dangerous for them to walk. I have visited the place where they want to construct the track and I’d be very pleased if the film helped that become a reality.

Results wise, we’ve already had confirmed distribution for the film. It looks likely that it will run in most parts of the world.

The most important goal for me is for people to see the refugees as people. As individuals with names. They are great people. They are now my valued friends and we talk all the time. They are funny and bright and hopeful and above all inspiring. I want people to them as human beings.

The story of refugees has been told in one way by the media. It’s told as a mass, not the individual. It could be us but for the accident of our birth. These athletes have a lot of life lessons to share. It’s worth listening. 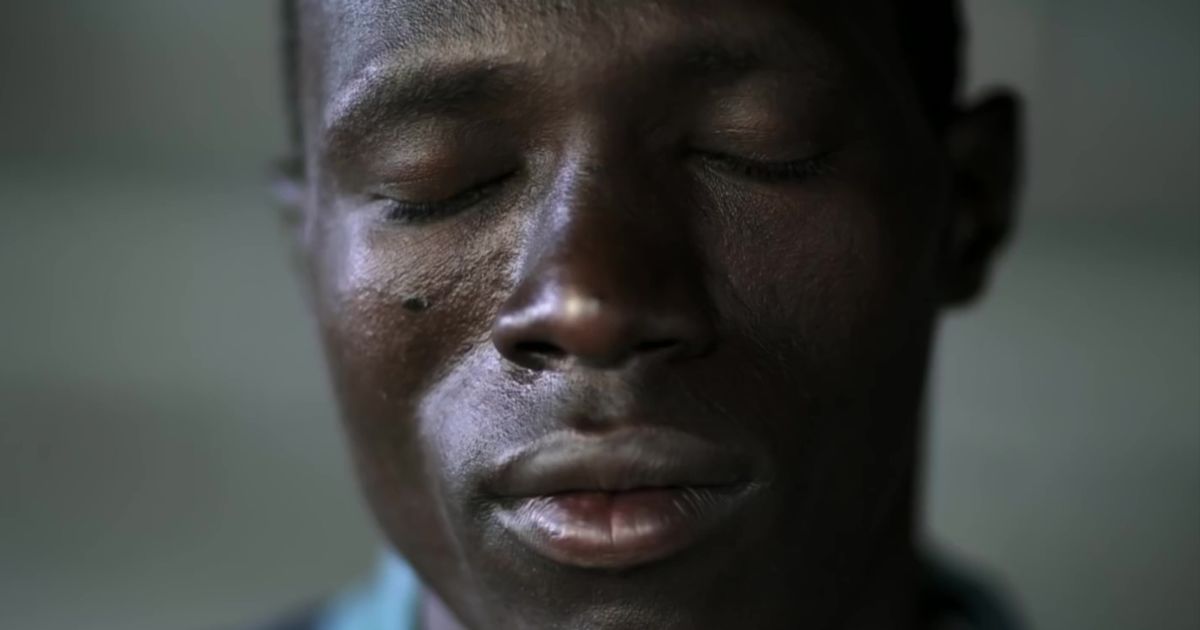 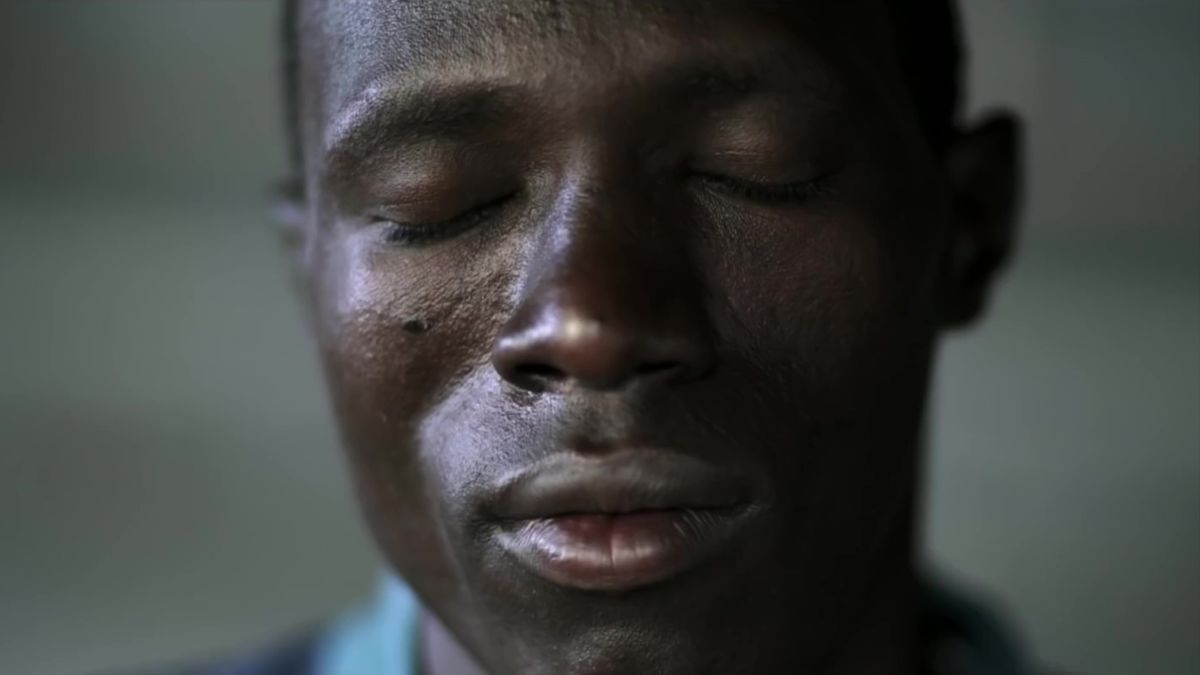