Andy Lambert, the man behind the MUTE Series, explains the origin and appeal of the one-shot, no dialogue shorts.

by shots on 17th October 2016
This article was created before we re-designed shots – it may look a little strange or not have the same features as new articles. If you see something particularly wacky, please let us know on shots@extremereach.com
Share

Andrew Lambert has just released four new shorts for his online MUTE Series. If you haven't so far heard of it, MUTE is a selection of short, dialogue free, single shot, no camera movement films which are a clever and often funny bite-size slice of life.

Originating when Lambert [pictured right], a director at 76Ltd, finished a shoot early he decided that, rather then waste the opportunity of a crew and cast, he would shoot a short film with the most interesting prop they had to hand, a sousaphone tuba.

With no sound recordist he couldn't record dialogue, and with the dolly grip already wrapped, he couldn't move the camera. And lo! MUTE Series was borne.

Here we talk to Lambert about the new films, as well as the existing eight already completed and get to the bottom of what makes a great MUTE idea.

How well did that first film come out, what was it called and did you immediately think about making it into a series?

This first film was called Tuba. Or Not Tuba [below]. Not having any recorded sound, it took me a while to piece all the audio together, but once it was finished people really liked it.

At the time, I thought that this would be a one-off experiment. But, weirdly, a similar thing happened on the next commercial shoot I was on: there was an hour left over at the end of the last day.

Tuba. Or Not Tuba. from Andy Lambert on Vimeo.

This time I had a cast of 50 extras dressed in yellow so I created a scenario based around them. Once again, there was no sound recordist and so there was no chance to have any dialogue. I wasn’t really planning for this second film to copy the first one in it’s approach, but after aborting the idea of utilising cuts and not being very happy with attempts to move the camera, it ended up, as before, as a single, static shot.

Suddenly, I had two micro-length films in the can that were very similar in style. And that's when I realised I was onto something. The limitations I faced in making these two shorts were something to be welcomed. They weren’t so much limitations as… rules:

Rule 3) Only one shot

I've shot 10 more films since then, thankfully with a bit more preparation than the first two which were essentially improvised with what we had at hand.

When does the inspiration for the films strike, or is a more workmanlike process of coming up with something?

A bit of both. Now I’ve made a few of them I’m quite alert to being inspired. It might be my own observations of myself falling asleep in front of the TV (Sound Sleeper), or it might be watching people going to great lengths to make sure no one can see them when they're changing on the beach (Dress Code, below).

But once I’ve made the decision to go into production it can also be quite workmanlike. I generally write five or six scripts for every film I make. I like to live with them for a bit and see if they still entertain me a few weeks later.

Generally, I'm drawn to absurdity, futility, the pressure to conform, indifference, the poetry of the loser. I've been told that some of the films illustrate key concepts in social psychology, although that is never my starting off point. Also, death is a recurring source of humour and I have to stop myself making all the films about it!

The previous series of films are often quite surreal; is that the ideal MUTE film, in your opinion?

The perfect film is not so much about the aesthetic register, than the journey it takes the viewer on. Ideally, it should intrigue at the beginning, build slowly, becoming more comic or absurd, and climax with a funny twist.

But the humour should resonate beyond the setting of the film. It should capture some kind of feeling or emotion that rings true or has some insight, however small. I’m not sure I’ve made the perfect MUTE film as yet, which is why I keep making them!

The films are also, in general, comedic, harking back to classic silent cinema comedies; do you think a MUTE film might ever move away from comedy?

Although without dialogue, the MUTE films aren’t ‘silent’, as sound is a really important part of the films and can help to tell the story and sometimes even provide the gag. I love silent comedians like Buster Keaton and I would be interested to do something as physical as his stuff one day, but I feel more influenced by contemporary filmmakers such as Roy Andersson, Jim Jarmusch and Aki Kaurismaki. Obviously, Jacques Tati, is an influence too.

The Late Man, another in the new MUTE Series.

How do you feel the MUTE films test you as a director?

The one, static shot restriction of the MUTE Series is a great challenge in terms of directing, especially when it comes to humour. Visual comedy so often hinges around a ‘reveal’ of some kind, which is so easy to do as a cut or a camera move. But I don't have that luxury, so I am always having to reveal things within the frame.

Consequently, there's a lot of characters entering and exiting frames and that also has a bearing on the pace of things. Although they're short, the films have a 'slow burn' quality about them which you have to embrace.  For me this adds to their humour and charm. It does make it tricky to predict how long the final films will be but so far they've all come in at around 1½ - 2 minutes long.

The Crush from Andy Lambert on Vimeo.

What’s been your favourite film to shoot so far?

The Crush [above], which is one of the new films released this week, was very satisfying to pull off because I quickly realised that it was a pretty ambitious ask. It's the first film in the series with 'special effects' and, without wanting to give too much away, involved cardboard boxes that were puppeteered.

Needless to say, it was a lot more complicated than I expected. Absolute Post in Soho did a great job removing the wires and seamlessly joining the jump cuts and I was really happy with the end product. It was nice to do something with a different technique to the other films and I’d like to do other MUTE films that surprise viewers in that way.

Have you considered inviting films from other directors to the series?

I’ve had a couple of people suggest this to me before, but it's not something I’ve considered. Probably if I was more of a producer I would see the benefits of opening it up and challenging other filmmakers to do a MUTE, maybe even organise something like the Straight8 thing, but as a director I am not that interested in being a ‘curator’. Or maybe, I just don’t want any competition!

Wait For It, another new MUTE short, just released on Vimeo.

You’ve just released another four films; how often do you shoot them and when can people expect the next set of films?

The MUTE Series films are quite irregular, there hasn’t been any particular plan with releasing them. The latest batch of films was slightly different because we made four in one go (across two days).

Previously, all the other films were made one at a time, although I like to release them in batches as I think they work better in a group. The new ones were also done in a more professional way as 76Ltd, the company that represent me for commercials, came on board as producers.

Mark Murrell, 76Ltd’s MD has always been a big fan of The MUTE Series and with his support I could take the series to the next level, doing a proper casting (with Kate & Lou Casting) and having a reasonably-sized crew.

Some of the previous films were quite small productions and for one film, The Searchers, I even had to resort to casting myself and I've never acted before! It would be nice to make MUTE more of a regular thing now with, say, four new films coming out every year.

You can view all of the MUTE films on the MUTE Vimeo page. 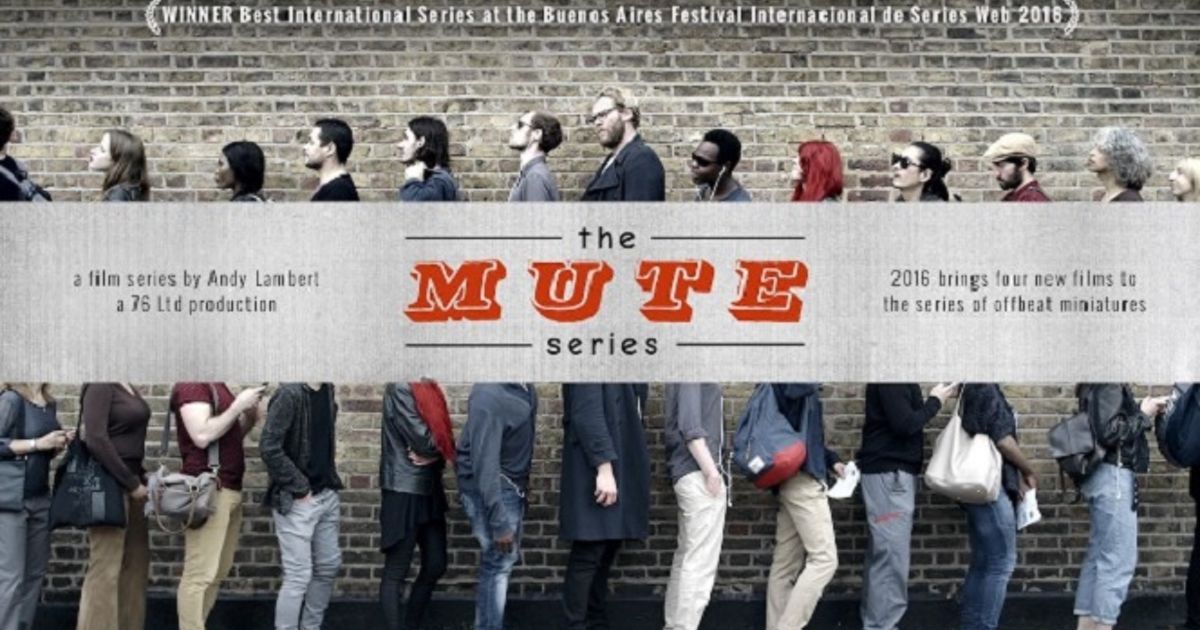 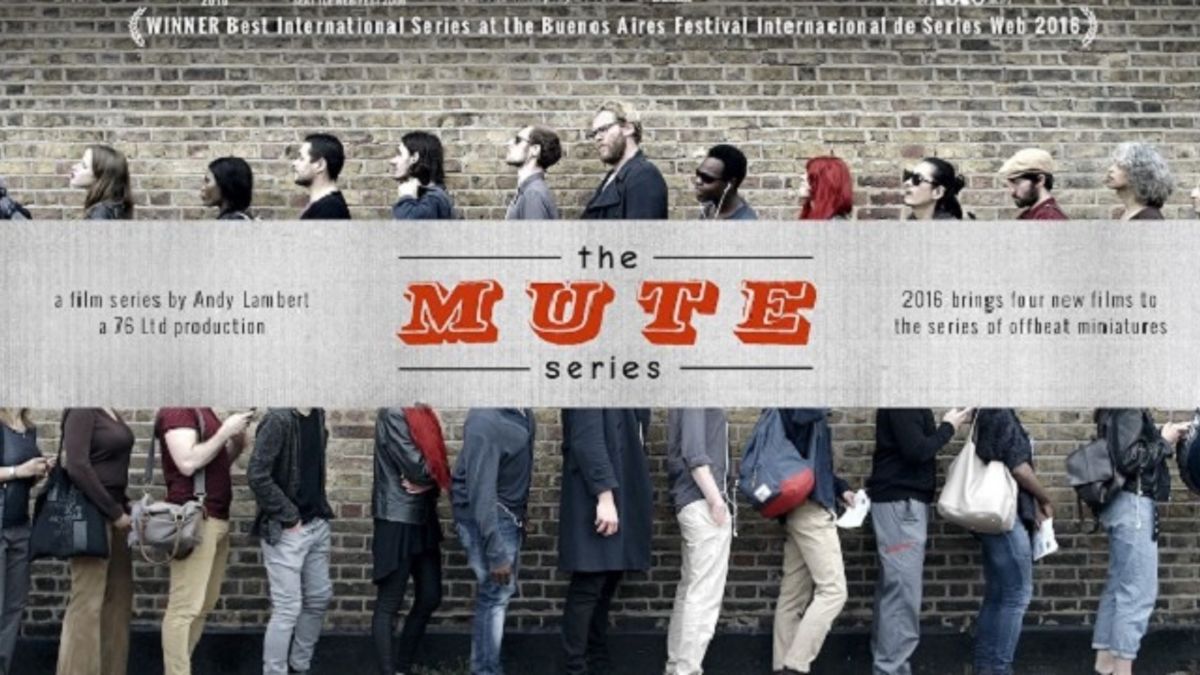