When it comes to isolation, it's create or hate

Greg Quinton, Chief Creative Officer at WPP global brand agency Superunion and co-author of A Smile in The Mind, examines how the recent months of isolation were endured, enlivened and enriched due to the human need to create.

The pandemic has obviously been devastating for so many, and lockdown however, has been a unique moment in time.

Personal experiences will be the subject of anthropological studies for years to come. For many, it seems, creativity became the mental saviour, but has a lack of it turned others to hate?

I should explain. Anthropology is not my area, and I’m not an academic. But I am fascinated by that most amazing of human organs - the brain - specifically, the right-hand side of it; that little creative bit that makes all the difference. “Creativity is essentially responsible for all of human progress” writes Teresa M. Amabile, Director of Research at Harvard Business School. Humans have an ‘inbuilt creative drive’ meaning that we can imagine something, and then make it real. Above: The cover for Vogue's September issue, shot by Misan Harriman, the first black photographer to shoot a Vogue cover.

But how can we imagine if we are denied our usual cultural stimulants (galleries/theatre/live music/dance etc)? Over the lockdown months we turned elsewhere to keep busy: to the homes we usually spend so little time in; to organising; to decorating; to getting fit with Joe; to the books that have been ignored since purchase; to guiltily relaxing; to re-engaging with our loved ones; to the screens of every size; to social media; to the lifeline to the outside world; to the web.

How can we imagine if we are denied our usual cultural stimulants?

These things have been discussed endlessly, the emotional rollercoaster less so. Fear, insecurity, nest-building, introspective planning, new routines, smaller life circles, drinking, fun, clapping, guilt. The novelty quickly turned to new levels of boredom. The dictionary defines monotony as 'the lack of variety and interest; tedious repetition and routine. E.g. "You can become resigned to the monotony of captivity"'. Yep.

The context of an endless Groundhog Day put a sharp focus on the newsfeeds. Cultural inequalities, unevenly distributed resources and poor, confusing and ineffective leadership was heating the water, but on May the 25th the pressure valve was released and the steam of anger exploded with the murder of George Floyd.

By using individual and collective means of creativity we find ways to channel frustration.

The emotion spilled over to the streets with thousands defying government restrictions and risking their own lives to collectively broadcast the message through whatever creative means possible; placards, prose, poetry, song, projections and street art. Artists from around the world showed solidarity with BLM, and the raw emotion of the protest movement was captured on camera by Misan Harriman, becoming the first black photographer to shoot the cover for Vogue. In June, anger at leadership was expressed collectively and creatively by TikTokers who claimed part credit for the idea of registering for seats at Trump’s Tulsa rally, but then not attending, thereby ensuring thousands of empty seats.

By using individual and collective means of creativity we find ways to channel frustration, to release emotions and, in this case, communicate the urgent need for change. It reminds me of UK Prison charity Fine Cell Work, who recognised the need to channel prisoners’ energy and pent up frustration into something creative and useful by teaching inmates high-quality needlework; “The fine skill focuses the mind, boosts their self-worth, instils self-discipline, fosters hope, it also has a spiritual quality.” 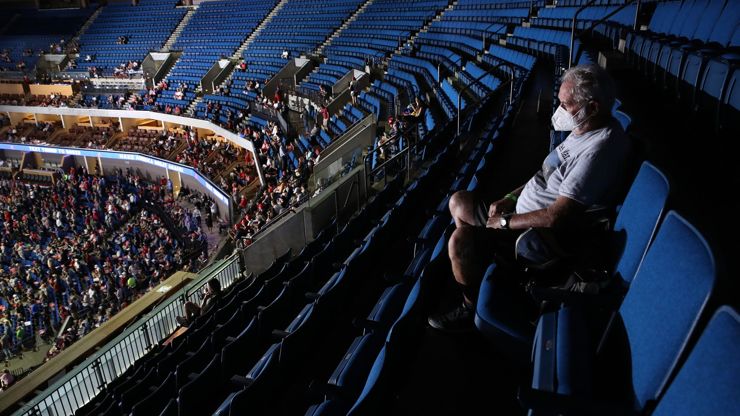 Above: TikTokers claimed part credit for the low turnout at President Trump’s Tulsa rally, and a projection following the killing of George Floyd.

It’s not prison, but for months we have been in a form of self-enforced isolation, finding our individual creative expression appears to have been important for so many. British artist Grayson Perry’s TV show Art Club taught art classes during lockdown, with 1.3m viewers tuning in live, and 10,000 pieces of art submitted by the public. Examples of hope and creativity have flourished, sometimes in the most unexpected spaces.

The residents of a senior care facility in the UK recreated famous album covers, and a woman in Wales was surprised to find she went viral after turning the flowers on her garden wall into a Trompe l’oeil tree mural to the delight of locals and twitter. Balcony musical performances - from opera singers to saxophonists - spread across Italy as people tried to entertain their neighbours, while London’s Regent’s Canal was treated to a stunning ballet performance by two dancers from The Royal Ballet alongside the canal. 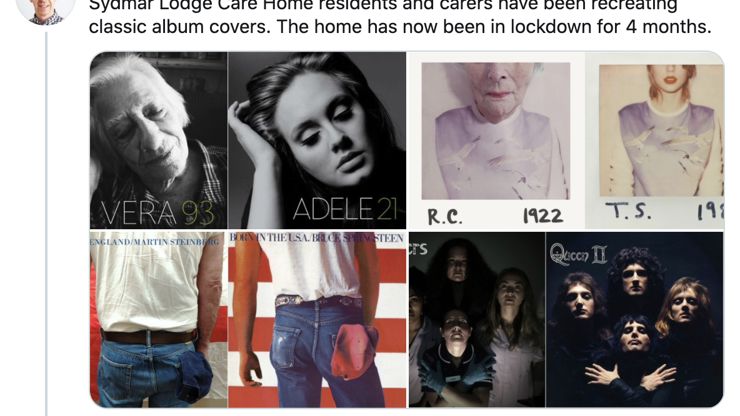 Above: Care facility residents recreating famous album covers, and a Welsh garden mural were celebrated creative activities during lockdown in the UK.

Brand bright spots include Ben & Jerry’s release of a limited edition range of Cancelled Wedding Cake ice cream to comfort the disappointed. With galleries closed, The Getty Museum challenged people to create world famous masterpieces with everyday household items. Manchester United highlighted the need to celebrate the NHS with some clever use of neon. Even celebrities flexed their creative muscles in new ways, my favourite being John Krasinski’s SomeGoodNews channel, reminding us all of the reasons to keep smiling.

The need for brands to communicate and the opportunity to effectively do so, is greater than ever.

Sometimes it is necessary to turn off the newsfeeds and seek out something that reconnects us, that makes us smile, to check out our amazing human capacity to collaborate and create. When you find it, the world really doesn’t seem so bad after all.

Nike – You Can't Stop Us 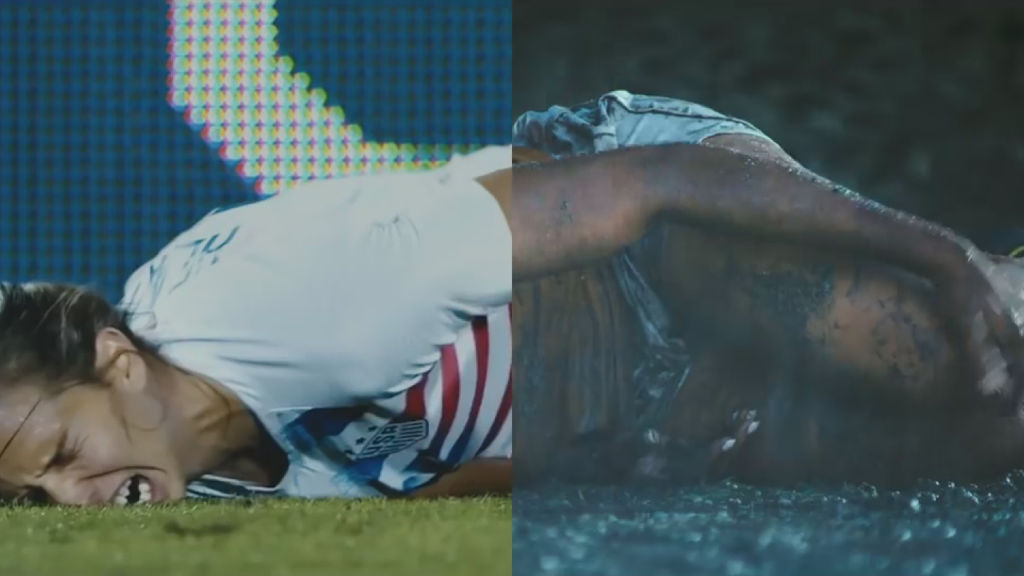 Above: Nike's You Can't Stop Us.

Amidst the harsh background of economic uncertainty, the need to protect businesses and jobs has been the priority. Ironically, the need for brands to communicate and the opportunity to effectively do so, is greater than ever. Agencies and brand marketing heads are rightly hyper-sensitive to the audience mood. A mistake under this audience scrutiny could mean brand and business disaster.

Hopefully this period of reflection will help us all to recalibrate and reprioritise.

Amazingly, one of those truths in creativity is that the tougher the situation, the tighter the brief and, often, the better the result. Some clever examples include Fortnite, which led the way by hosting a virtual concert which was viewed by 12 million people, and its fight back against Apple in the form of a parody of its classic 1984 Super Bowl ad. Nike’s You Can't Stop Us [above] is a beautiful piece that is both timely and relevant and a masterpiece in editing. And IKEA showed its playful side with Forts, a classic IKEA instruction manual, but for homemade forts.

I believe that you should always respect your audience and assume they're intelligent. The challenge right now is one of balance, of producing something that is both brave and appropriate for the time. Get this right (across all touch points) and your brand will be remembered, respected and, hopefully, even loved. Don’t get it wrong.

The challenge right now is one of balance, of producing something that is both brave and appropriate for the time.

We know that creativity is hard-wired into our brain as a species in order for us to progress, to make sure we stay sane, social and soulful. Hopefully this period of reflection will help us all to recalibrate and reprioritise. Change what we do, how we do it and who it impacts. Let’s continue to use our brains and creativity as an outlet for positive change because I, for one, believe that the more we create, the less we hate, and the more love there will be on this fragile, beautiful planet. 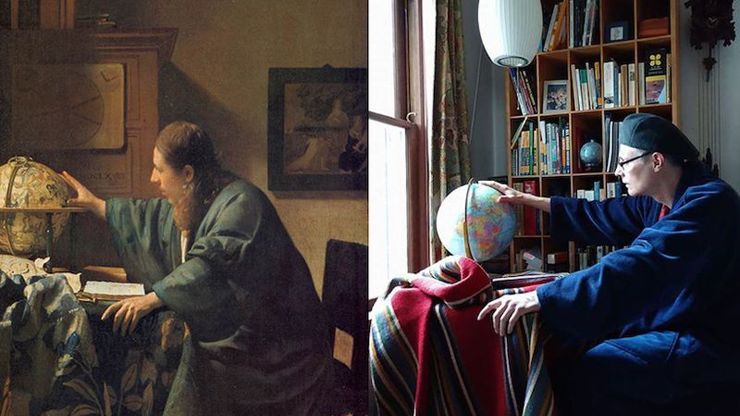 Above: Above: Ben & Jerry's and The Getty Museum were creative bright spots in lockdown.