Football, it transpired earlier this month, was not coming home. Not until next year, anyway.

The Euro 2020 tournament was a celebration, an end-of-covid coming together, where rivalries and differences were put aside while we cheered on the boys. And then it wasn’t.

So-called fans decided the players they had supported for weeks on end were nothing more than the colour of their skin.

England players went from heroes to the target of racist abuse quicker than you can say ‘this is why we’re taking the knee’. So-called fans decided the players they had supported for weeks on end were nothing more than the colour of their skin. We went from England at its best to England at its very worst. This is, of course, nothing new. Racism is a scourge that we each have a moral responsibility to face head on, in any way we can. That extends to brands, agencies, and any other individual or organisation that wants to see real change. 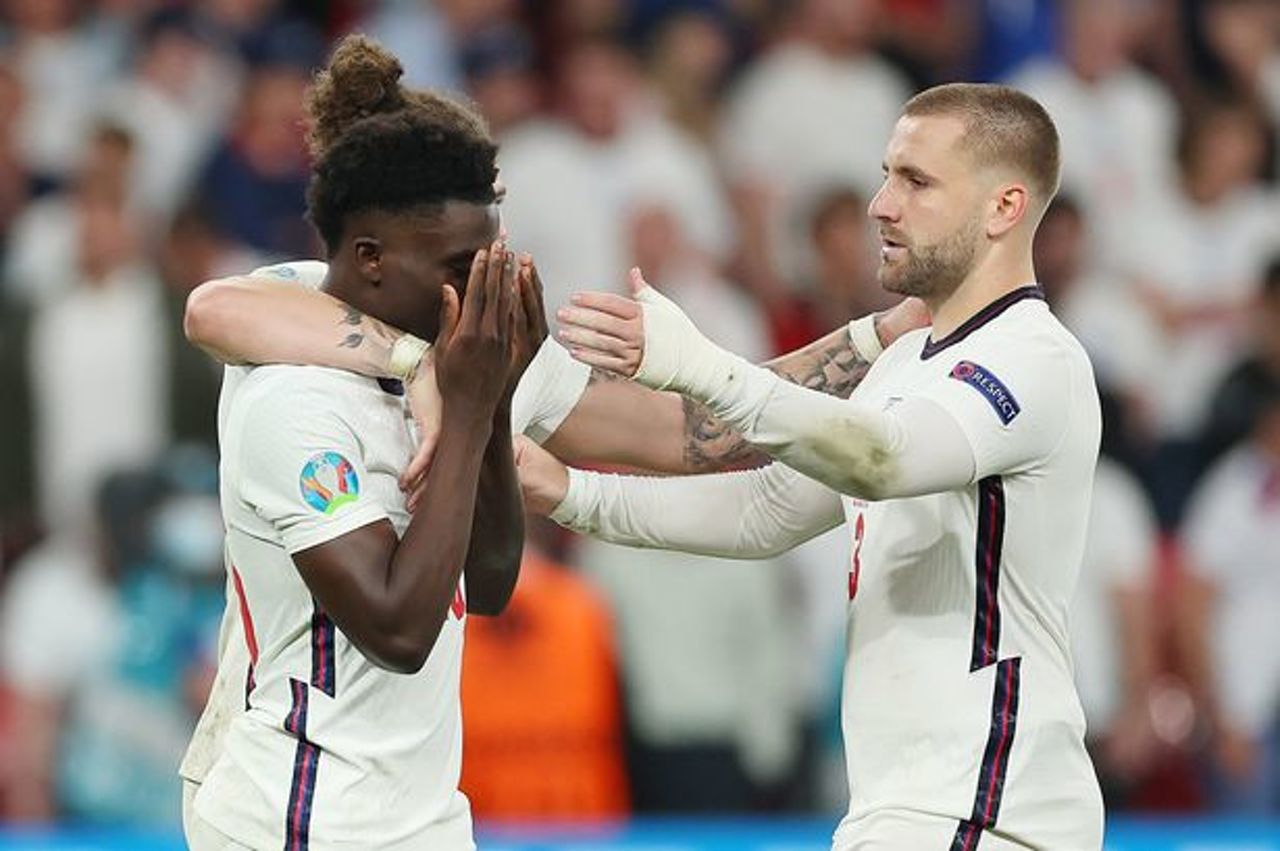 Above: 19-year-old Bukayo Saka is consoled by team mates after his penalty miss. He and fellow players were subjected to vile racist abuse after the match.

Ahead of the tournament our small part was We Are England, a campaign platform aiming to try to better understand the perceptions English people with multicultural backgrounds have of English football fandom and all its connotations. After the hatred we witnessed, the results feel like a sad prophecy.

We found, for example, that English people from Black, Asian and minority ethnic families were more likely than the population at large to support the Euro 2020 team by a margin of 47% to 65%. A generation of kids look up to the likes of Marcus Rashford, Bukayo Saka and Raheem Sterling – role models forged in the heat of the tournament who offer aspiration and belonging – only to then see them abused by bigots.

A generation of kids look up to the likes of Rashford, Saka and Sterling – role models who offer aspiration and belonging – only to then see them abused by bigots.

Is it any wonder, then, that English people from multicultural backgrounds, despite supporting the team overwhelmingly, would not feel pride in wearing the England shirt? Or that they would think twice about wearing it in public? Even prior to the events following the final, stereotypes of England fans as ‘racists', ‘thugs', and ‘drunks’ were prevalent in our research. These impressions impede fans from Black, Asian and minority ethnic backgrounds from wanting to associate with the shirt and team. I imagine if we re-ran the survey today, the figures would be even starker. 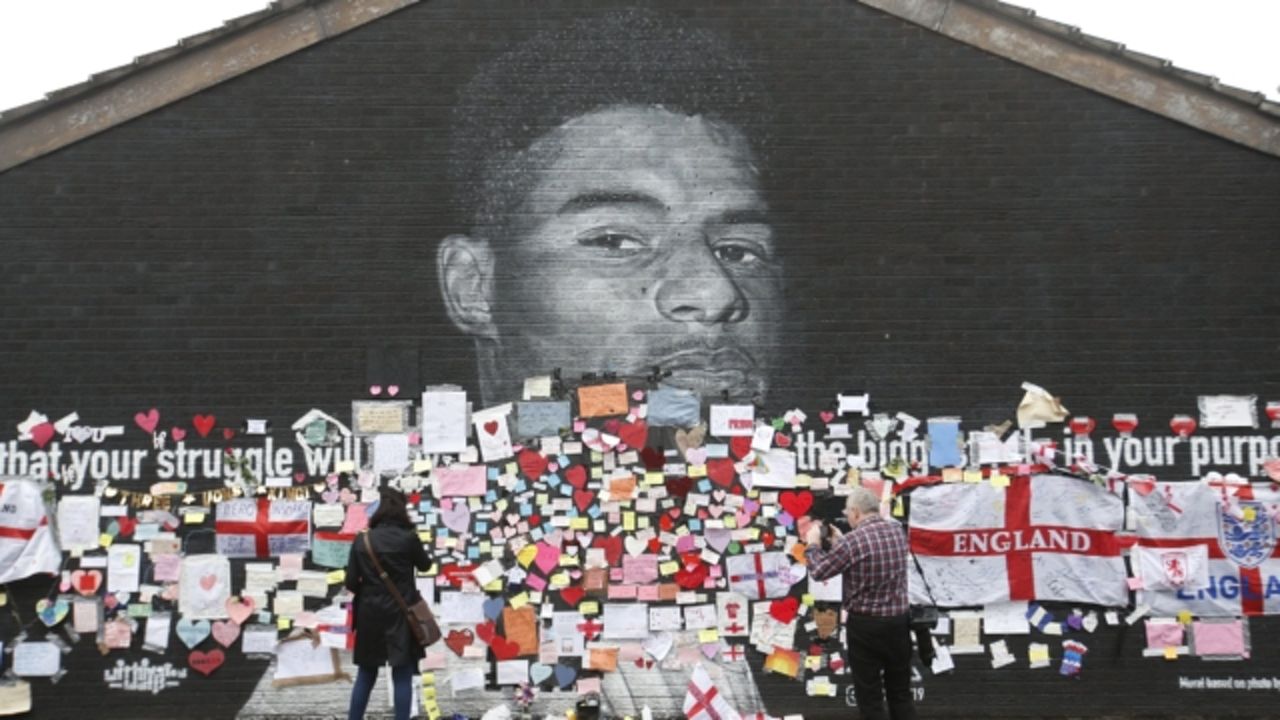 Above: A mural of Marcus Rashford, who missed one of England's Euro final penalties, was defaced with racist abuse before that abuse was then covered in tributes and positive messages.

After the shameful response to England's loss, it was refreshing to see the solidarity on display from England fans who stood up for what it truly means to be English; to celebrate our melting pot country and the myriad of cultures that make it what it is. Fans are a community. Some may argue that it is just a minority of malicious actors causing trouble, but that is to miss the point.

We can joke about brands being moral arbiters of the 21st century, but it’s true: if you have a platform, you need to use it.

Next year’s World Cup in Qatar is an opportunity to show what we really stand for. To put ourselves on display at home and abroad as a country that is deeply anti-racist. While some brands, notably BT and ITV, were laudable in their message of solidarity, many more firms with big platforms were deafeningly quiet. We can joke about brands being moral arbiters of the 21st century, that where once we looked to the state or to religion for guidance we now turn to brands, but it’s true: if you have a platform, you need to use it. We need to drown out the hatred with a torrent of love. To marginalise and ostracise those whose views are motivated by irrational hatred.

There’s a huge appetite for an abrupt change of pace, of a campaigning, protesting mindset, especially from younger, more progressive fans. Like those from multicultural backgrounds, Gen Z’s views on the matter are hugely divergent to those of older generations. They were least likely of all to feel pride in wearing an England shirt. They do not feel the England shirt is representative of English society. Above: ITV's full page advert in support of the England team after some members of the squad received racist abuse online.

We all want a country we can be proud of, and that means taking action, wearing your heart on your sleeve, making your brand’s views known, joining the majority who oppose bigotry in all forms. Everything a brand does, from inclusive hiring policies, to promoting diverse voices, to offering a platform to messages of support, makes a small but positive difference.

Everything a brand does, from inclusive hiring policies, to promoting diverse voices, to offering a platform to messages of support, makes a small but positive difference.

The World Cup in 2022 is an opportunity to right the wrongs of the Euros, for people and companies to create an unclimbable wall of support around our heroes, to unite around and celebrate our differences. Asked whether they thought ‘more needs to be done’ to make all people living in England feel welcome to support the England football team, a majority of the population at large answered 'no'. When we put the same question to our diverse panel, the answer was overwhelmingly yes.

So, whose side are you on?