For this months interview with unsigned directing talent, we talk with Eli Powers about his short film Fish, the mundane realities of day-to-day life and big inspirations that have guided him on his journey.

by Daniel Huntley on 17th March 2022
In association with

In the latest of our monthly interviews with unsigned directing talent, we spoke with young American director Eli Powers about his short film Fish, featuring a fisherman that embarks on a journey into his past.

Can you tell us a little about your background and your route into directing?

I’m from Cape Cod, the picturesque vacation town that everyone visits but few are actually from. It’s a place of extremes: packed to the gills with tourists in the summer, and in the off season it’s a ghost town for the tough and strange. The hyper-specific environment deeply influences my creative work, as I often gravitate towards characters and stories that exist on the margins.

My road to directing started when I picked up a camera at thirteen and never found any good reason to put it down again. It’s felt natural to dedicate my life to it.

Would you say you have a directing style? How did you arrive at it?

I think there’s an underlying sense of humour in all my work, even within stories that stray towards the dramatic. I feel most most comfortable navigating between opposing visual and emotional tones, weaving together moments that may seem disparate on the surface.

I’m a child of 90's Blockbusters so there’s a desire to infuse the story with a restless forward momentum. I’m always counter-balancing that MTV-brain energy with a natural need to slow the pace and let the moments breathe. I never try to push a scene in a direction it doesn’t want to go. I’m an intuitive director and so much of my process is about trying to stay fully present in the moment with the actors, and being open to change, improvisation, possibility.

Did you study filmmaking? How did you learn your craft?

I went to Emerson College for Film Production and after graduating I started working on film sets where I had the opportunity to learn first-hand by watching masters like Paul Schrader, David Fincher, and David O Russell do what they do best. 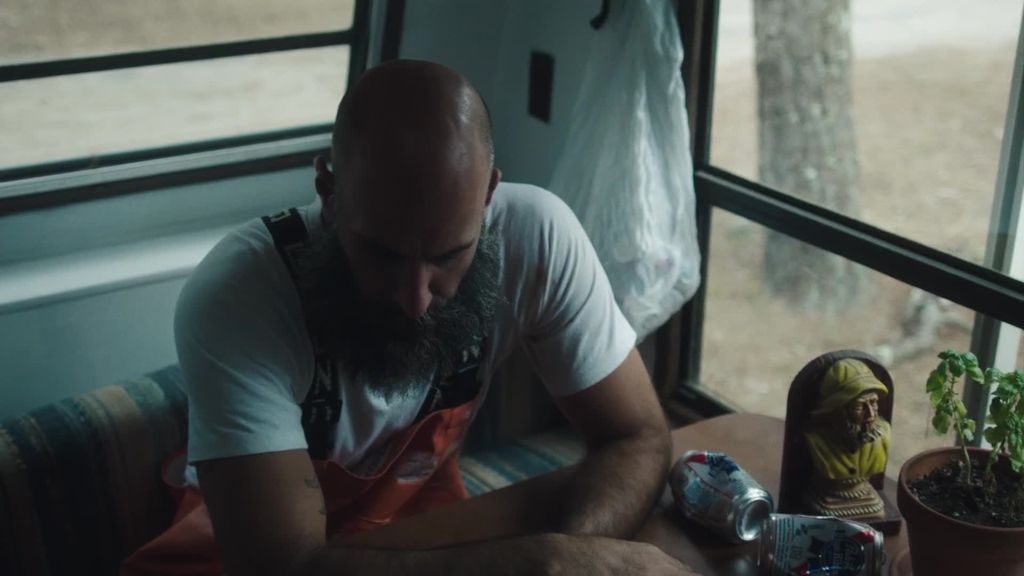 What was the inspiration for Fish?

Greg Vrotsos reached out to me and said that he had been growing a quarantine beard for six months and wanted it immortalised on film. I liked his work in the new Twin Peaks and in Orange Is The New Black playing volatile masculine characters. I wanted to subvert his manly-man image to capture a character’s facade crumbling.

I was interested in creating something that was both a quirky surface level dilemma about a man trying to deal with the inconvenience of a big stolen fish, and beneath that: an emotional parable about grief. It needed to work on two levels, as a character study and as a symbolic journey.

What other directors' work do you admire? What is it that stands out?

I like Paul Thomas Anderson's jittery confidence, I like Jeff Nichols’ human stories of supernatural realism, I like how the Coen’s riff within genre, I like how Stanley Kubrick directs his performances between minimalism and over-the-top showiness, I like Robert Altman’s orchestral camera moves, I like Wes Anderson’s costumes as a story within themselves, I like David Fincher’s exacting precision. I pick and choose from everyone. It’s usually the little moments that inspire me.

Where do you find the inspiration for your projects?

All the characters I’ve meet in my life, the charming dysfunction of my family and every family that’s ever existed, other peoples nightmares, the hilariously mundane realities of day-to-day life; it all fuels my need to tell stories. Sometimes projects come together all at once in a complete vision, other times they are amalgams of collected odds and ends. For me, the inspiration is never the hard part, it’s the ferrying of the inspiration towards plot points and into story, and driving that all forward in one direction. ABOVE: BTS photographs on the set of the FISH shoot.

What were the biggest challenges you faced in pulling this project together?

Covid-19 was the first big logistical hurtle. We had an incredibly small crew, and shot in mostly open air exteriors with natural light. It became a good opportunity to get back to basics and find the simplest most effective way to tell the story.

We shot for three days. Filming at sea wasn’t easy. We had one boat with our cast and another with the camera team. We rigged the fishing rod with a weight to give the effect of a fish on the line, but it kept getting dragged under the boat with the tides. The boat needed to face a certain way so we could backlight with the sunrise so we were making ourselves dizzy, spinning around in circles, moving the boats. The ocean is unpredictable. It doesn’t always do what you want it to do. ABOVE: BTS photographs on the set of the FISH shoot.

I learned most about editing, about knowing exactly what I need to capture on the day. We shot Fish very freeform and loose, letting our actors take longer takes and try different things without worrying too much about marks, but that style inevitably influenced the way we could cut. I’m happy with how we leaned away from match-on-action and into emotionally driven cuts, but that doesn’t work for every story.

A few months later when I directed Skin & Bone, I reigned in the jazzy approach and went back to a more disciplined coverage style because I knew I wanted to achieve a more traditional edit.

What are your hopes and plans for the future?

Skin & Bone is premiering at festivals soon. I’m excited about it, it’s my second collaboration with Amanda Seyfried and first venture into the horror / thriller space. I’m using it as a proof-of-concept to get a feature version made.

I’m doing rewrites on Holy Moses, which is a feature based of my 2018 short. It’s a genre bending dark comedy about religion set across two different time periods.

I’m also in the process of outlining a serial killer mystery to be shot for a limited budget on Cape Cod. I’m writing specifically for actors I’m inspired by, and would love to bring them to my hometown to shoot a strange, dark, psychedelic film.

You can check out some of the amazing work put out by unsigned directors in our monthly shots Unsigned Showcase, here.

As Amy Kean continues her search for some of creativity's weirdest inhabitants, she talks to artist and writer stevexoh about unusual names, unexpected journeys and uncovering the secret of living.

Chaka Sobhani: The Way I See It

Now Global CCO at Leo Burnett, Chaka Sobhani spent over 10 years as a filmmaker and in TV, where she set up ITV Creative and worked on content for shows ranging from The X Factor to Downton Abbey. Moving into advertising she’s worked on award-winning campaigns for McDonalds, Boots, Coca Cola, Samsung and more. She talked to shots about Corrie, comedy and Cleopatra.

The Way I See It: Tim Godsall