Ben Golik, Chief Creative Officer at customer agency LIDA, examines a brand that has gone 'from litigious to lit' as it has carved a new creative path through the sometimes staid world of fashion.

Should a brand’s strength be measured by its steadiness? Or its stretchiness? How closed it is? Or how open it is?

Watching the four-year rise of Gucci under the messianic guidance of creative chief Alessandro Michele has been a lesson in brand reinvention. Not once, but repeatedly.

Last known for its Tom Ford-infused sexiness in the 90s, Michele inherited a fading house. 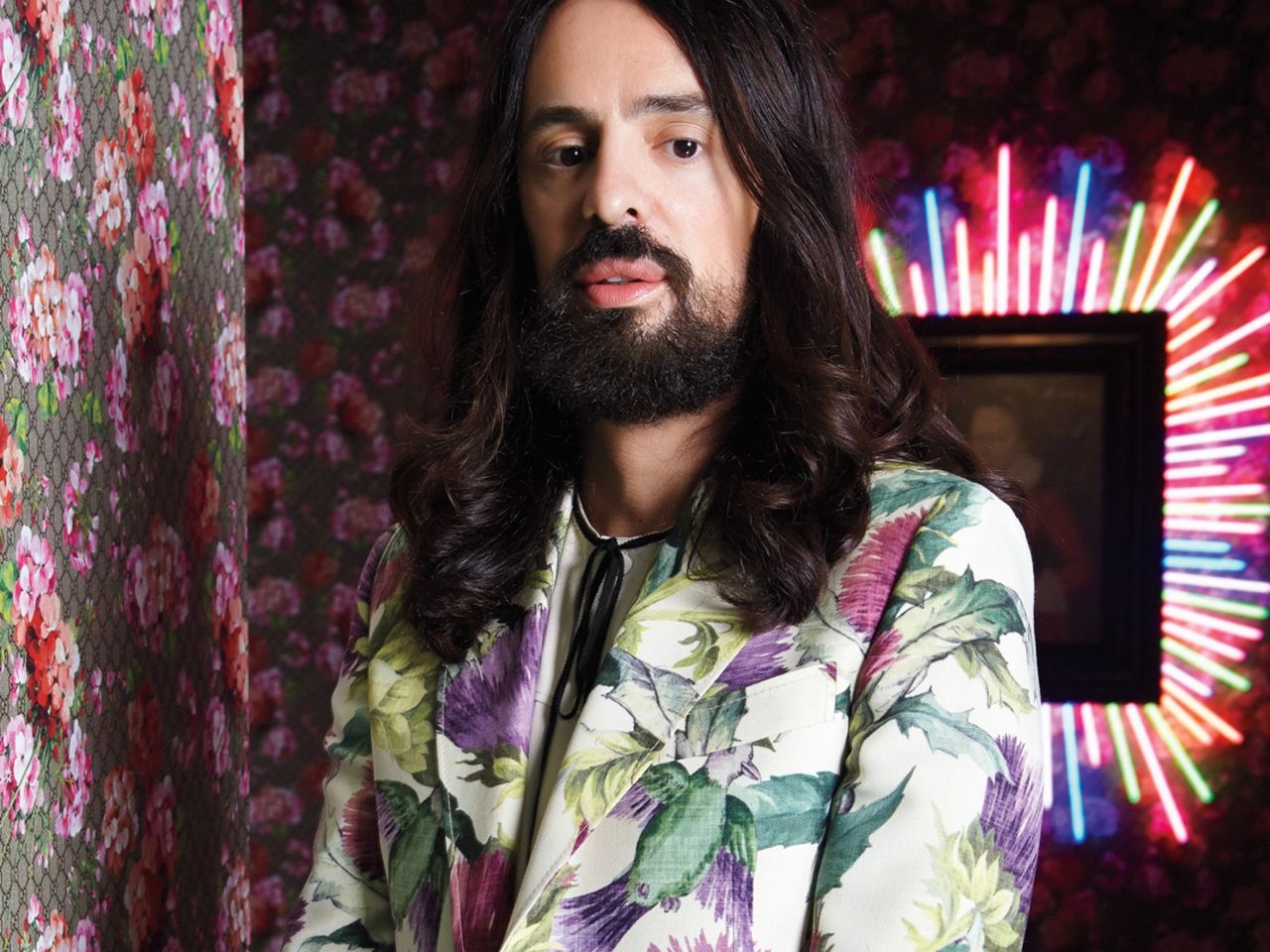 His tenure began with the now fashion-folklore story of his first catwalk show, which was put together within five days. That collection wasn't just fast, it was foundational. Out went the staid codes of luxury in favour of mad-Aunt embellishments: her in fur-lined slippers, him in blousy pussy-bows.

This was a new Gucci, for a new audience, and it made no apology. Where most brands take incremental steps forward, Gucci leapt with maximalist confidence.

And while Michele deserves much credit, it’s in letting go of the brand that he’s done it the most favours.

Gucci is plugged into the conversation going on around it. Listening to the buzz, in touch with culture. Seeing how its brand is being received, and making those responses part of its own development.

More than any others, luxury brands are tightly controlled. Held aloft to maintain exclusivity – and prices. But Michele has been generous with his new Gucci.

He invited a social media fan to design a collection, let a graffiti artist turn rip-offs into must-haves, and opened a shop with a purveyor of fakes.

Let’s take these in turn, because each is a powerful lesson in what a brand really is.

Unskilled Worker is the Instagram moniker of Helen Downie, an artist with a following for her quirky paintings of wide-eyed misfits. A fashion fan, Downie painted one of her characters in an early Michele ensemble, then posted it to her account.

Fan homages and street art haven’t always been so welcomed by Gucci. Luxury houses have traditionally clamped down on (mis)representations of their prized assets.

A print sale led to a conversation. That conversation became a collaboration. The woman who painted clothes on her characters, soon saw her characters on the catwalk. A Gucci capsule collection, decorated with her original artworks.

This trail of events shows how well Gucci is plugged into the conversation going on around it. Listening to the buzz, in touch with culture. Seeing how its brand is being received, and making those responses part of its own development. 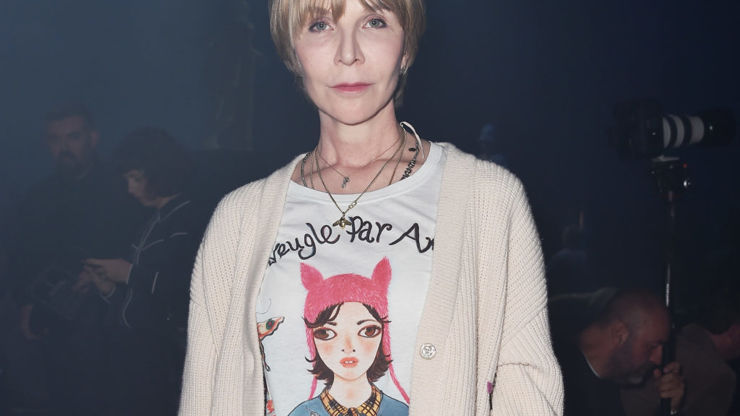 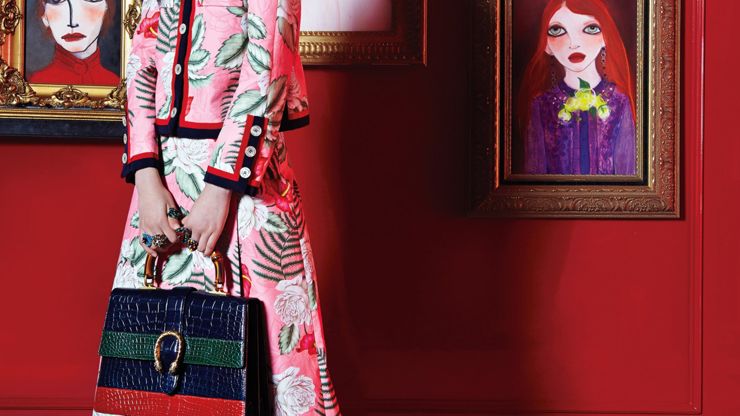 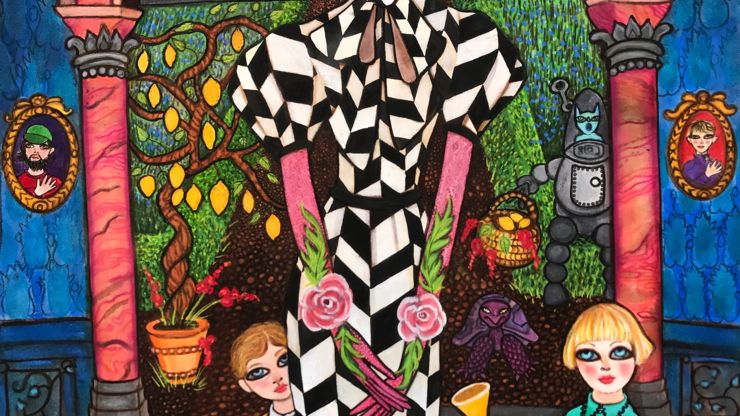 Above: Artist Helen Downie and her collaboration with Gucci.

Many brands claim to be 'part of culture'. The truth is, most simply steal from it. Gucci understands the cyclical nature of culture: you take out and you put back. And round it goes.

It’s something Trevor Andrew knows well. After a Halloween night spent cloaked in a Gucci sheet (clearly a story for another time), he began graffitiing as Gucci Ghost, tagging walls with his cheeky GG ghoul.

Rather than land in court, he landed a lucrative deal. An art space, funded by Gucci, and a collaboration sold globally. It’s another example of Michele welcoming in those with a fresh take on an old House. 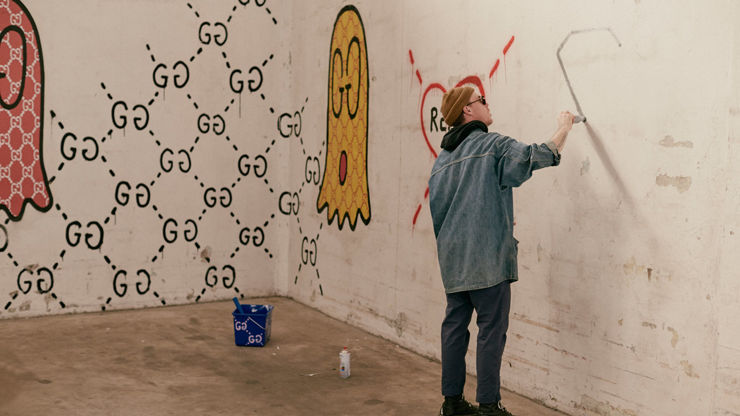 Above: Trevor Andrew, the creator of Gucci Ghost, with Alessandro Michele.

But fan homages and street art haven’t always been so welcomed by Gucci. Luxury houses have traditionally clamped down on (mis)representations of their prized assets.

In 1992, a Harlem tailor trading as Dapper Dan was shut down by lawyers representing Fendi. His crime had been to create 'knock-ups': versions of high-fashion garb recut for the streets and sold to his clientele of boxers and basketballers, pimps and kingpins.

The brand that once said “stay out” now says “come in”. And it’s a message that’s reaching customers, who’ve flocked to buy into Michele’s magpie mentality.

Gucci was among the brands he riffed on. He knew people that aspired to the catwalk names, but not to the conservative styles. And so he brought the two worlds together, filling a lucrative gap in the market. Celebs clocked on, his clothes got column inches, and soon the jig was up.

25 years later; the new Gucci. Michele invited Dapper Dan in. reopened his Harlem tailors, supplied him with official fabrics and let him get back to doing what he does best: making an old brand relevant to a new audience. 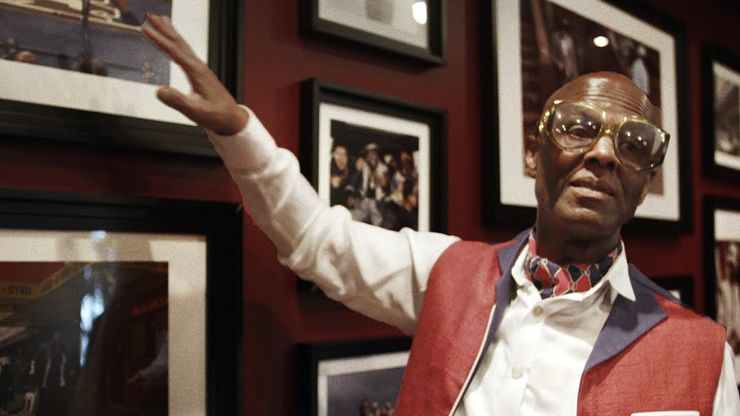 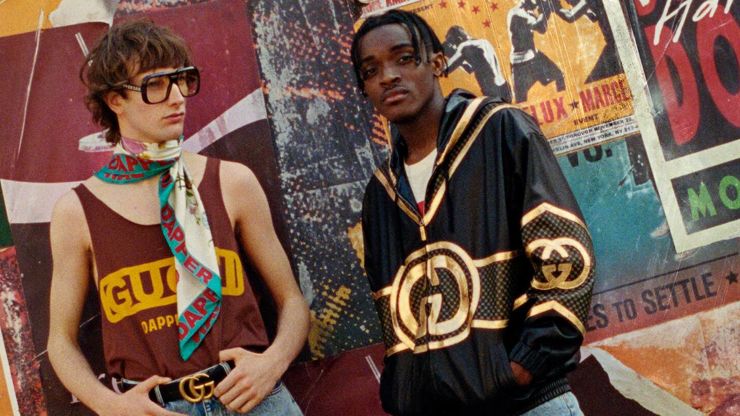 Above: Harlem tailor Dapper Dan and his collaboration with Gucci.

We’ve all had that brief. How incredible is that answer?

As a barometer of how Gucci has changed, it’s a stunning about-face. From litigious, to plain lit. The brand that once said “stay out” now says “come in”. And it’s a message that’s reaching customers, who’ve flocked to buy into Michele’s magpie mentality.

No matter how it looks, it all 'feels' Gucci.

You may think that all these collaborations might water down the master-brand. But each is done with the careful eye of a curator, perhaps Michele’s greatest talent. No matter how it looks, it all 'feels' Gucci.

A brand that feels right is surely stronger than one that just looks right? It can’t be defined by a pixel height or a Pantone swatch. The Gucci wordmark has been stitched, scripted, sprayed and even Sega’d. Because it’s just the logo.

It’s often been said that 'people buy from people'. The Gucci brand is more people than ever.

The brand exists in the mind, in the space between the company’s actions, and its customer’s reactions.

The Gucci brand is alive with the actions of Alessandro, and Helen and Trevor and Dan – and other collaborators like Glen Luchford, Elton John, Marina Abramović and Zumi Rosow.

It’s often been said that 'people buy from people'. The Gucci brand is more people than ever. 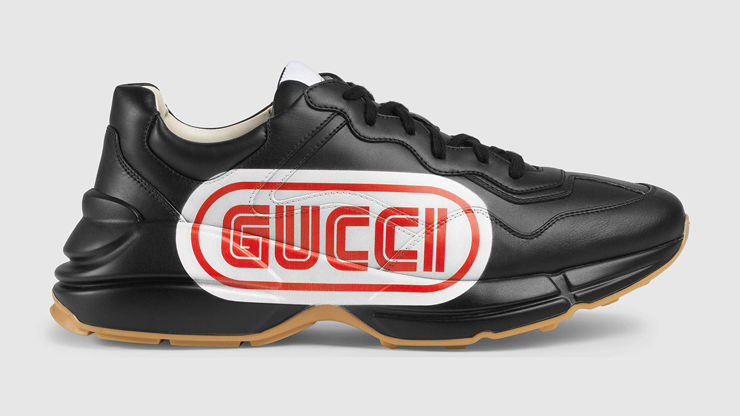 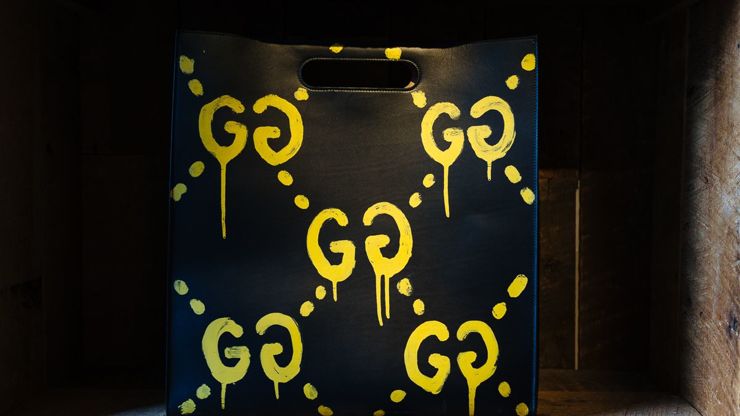 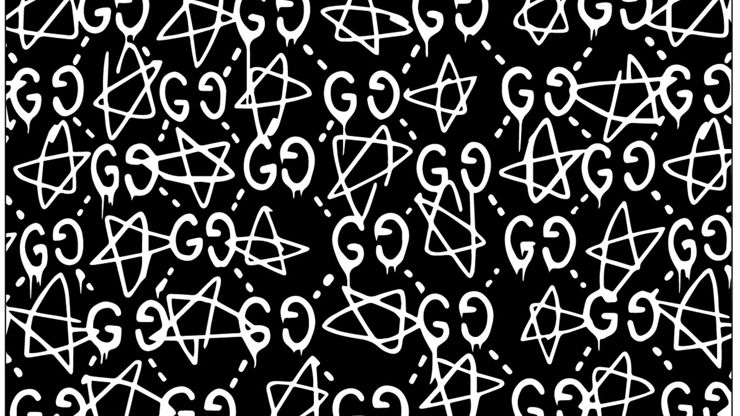 Above: The different iterations of the Gucci logo and wordmark. 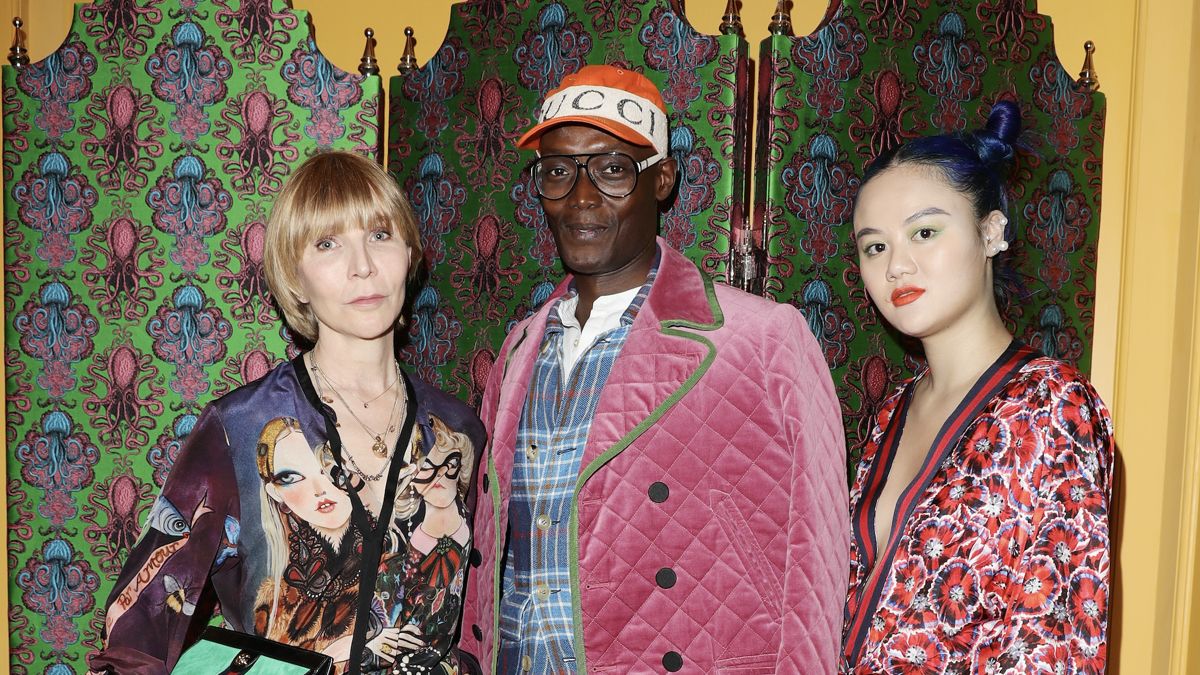