The truth is out there... and it’s written in sand and corn by land artist and ENVY’s design head, Matt Lawrence.

by shots on 15th July 2016
This article was created before we re-designed shots – it may look a little strange or not have the same features as new articles. If you see something particularly wacky, please let us know on shots@extremereach.com
Share

Matt Lawrence, motion graphics supremo and head of design at post-production  house Envy, didn’t get where he is today by driving around fields at night looking for aliens... oh, hang on, actually he did. Carol Cooper meets a man whose avid crop circle-chasing led to an after hours joint venture, b1ackprojects, that’s put land art on the map

Imagine a painter painting in the dark, a sculptor sculpting blindfold, a perfumier with no nose… how, indeed why, would an artist gamely carry on creating something he or she can’t perceive? Take Doug Bower and Dave Chorley, two pre-drone age crop circle makers who, throughout the 80s, would boldly go into the fields of southwestern England at night and create complex patterns by ‘planking’, i.e. tying rope to a piece of wood and using it as a treadle to flatten crop as they walked.

They’d only get to fully appreciate their laborious, transient works when a newspaper/aerial photographer published them. They contributed to a huge phenomenon that had crop circles attributed to UFO activity or various mystical earth forces. I ask Matt Lawrence how the circle makers monitored their work. “They wouldn’t,” he says, “it was just faith, they’d do their measurements, go out there with the plans and just trust in them.”

Beyond the fun of the hoax, it seems a lot of hard work with little reward. I suggest to Lawrence that it’s art without ego. A self-effacing man, he likes the phrase, though he’s cagey about whether he’s ever been a crop flattener himself. In fact it was his belief that aliens were doing it that led him into the field, or literally fields, in the first place. “I was interested in the paranormal and was lucky enough to grow up in Winchester, near where the first crop circles appeared, then the whole phenomenon exploded.

In 1989 when I was 17, I passed my driving test and drove around looking for them. I kept bumping into these two old guys out there at night who turned out to be Doug and Dave. They told me they were sound recordists, recording night bird noises.”

In 1991 Doug and Dave finally ’fessed up, and though many still prefer to believe that ‘space brothers’ made the circles, Lawrence reluctantly accepted the hoaxers’ confession and was gutted at the un-paranormalness of the truth. It was his Bournemouth University chum Martin McKinney, who persuaded him to see it as an art form and get involved. Together they formed b1ackprojects to carry on the land art tradition.

Meanwhile, Lawrence continued to build his career. After doing a film and TV design masters at Kingston he joined post-production/VFX house Rushes as a runner in 1998, working his way up to head of their in-house motion graphics department – MGFX Studio, which was launched with a giant sand logo made by Lawrence. In 2014 he left Rushes to join ENVY.

Meeting him in a windowless, tech-laden studio of the company’s plush London offices, one can see how land art offers a contrast. He’s currently working on graphics for Top Gear but likes “to get out in the fresh air, away from screens. It’s nice to unplug; get your hands dirty.”

Though many b1ackprojects creations have been for love, their collaboration with another group of land artists, The Circlemakers (aka Team Satan) led to notable commercial work, including in 2002, a collection of ‘cereal portraits’ promoting Orange Telecom’s picture messaging service and of daytime TV hosts, Richard and Judy, for Channel 4.

“The Circlemakers wanted to use the imaging techniques we’d developed to create faces so they brought us on board.” Later on they collaborated on C4’s Big Brother giant eye idents and the UKTV Gold sand portraits of comedy legends. “To create the faces we used a combination of methods, but it’s essentially lasers. We plan out all the measurements first on software, such as Illustrator, take dimensions then scale it up. Then we go out with a drawing, like an architectural plan. Martin developed this electronic gadget that can swing out accurate angles with a laser. You walk along the laser with your board [or rake if working in sand] and you get a perfectly straight line.”

The truth about daytime-telly watching Martians

The air of mystery surrounding land art, particularly crop circles, is part of its USP for marketers. The Richard and Judy portraits, for example, ‘appeared’ a couple of days before the PR for the pair’s TV show – though it was pretty obvious that unless Martians were huge fans of the duo they were unlikely to schlepp across the galaxy to recreate them in wheat.

A campaign in 2004 for tech company AMD saw b1ackprojects and The Circlemakers create five giant land art designs across America and the UK to promote a 64-bit processor. “We made these mysterious abstract designs which appeared in Chicago, Florida and other locations – then there was a big reveal.”

The use of drones to help monitor land art creation has revolutionised the genre and b1ackprojects were pioneers. “We were early adopters. A company called DJI brought out the Phantom 1 in 2013 and we modified one by sticking a camera on it. At the time drones were largely used for recreational flying, like model aircrafts.” When DJI launched a short film competition, they entered and won first prize with Artifical Agent, a whimsical piece about a future Earth ruled by creative robots who use drones to make sand art.

Commercially, Lawrence says land art goes on- and off-trend, but he and McKinney always have passion projects on the go. They collaborated with artist Julian Richardson on the world’s longest sand drawing, The Brean Mile in Somerset, and they’re always interested in developing new methods. “This is where we are taking it at the moment,” he says, showing me a koi carp leaping out of the sand on a Dorset beach. “We’re developing more shaded designs, shading into the sand with rakes, you need a tidal band, so you get perfectly flat sand to work with.”

Sharing the same primitive power as stone circles, chalk drawings and cave paintings, land art seems to hint at something beyond human agency. “We love primal ancient sites,” says Lawrence, “they are beautiful things on the landscape, especially when the sun’s low and you get long shadows.” His enthusing reminds me of the late Dave Chorley’s claims that it was the raw beauty of the English countryside that inspired him and Doug Bower and that ‘inside that beauty there are undefinable energies that attract and draw the artist to the land’. Even if you don’t believe in cereal portraits by ‘space brothers’, you’ve got to admit there’s something magical about humans and nature creating art together. 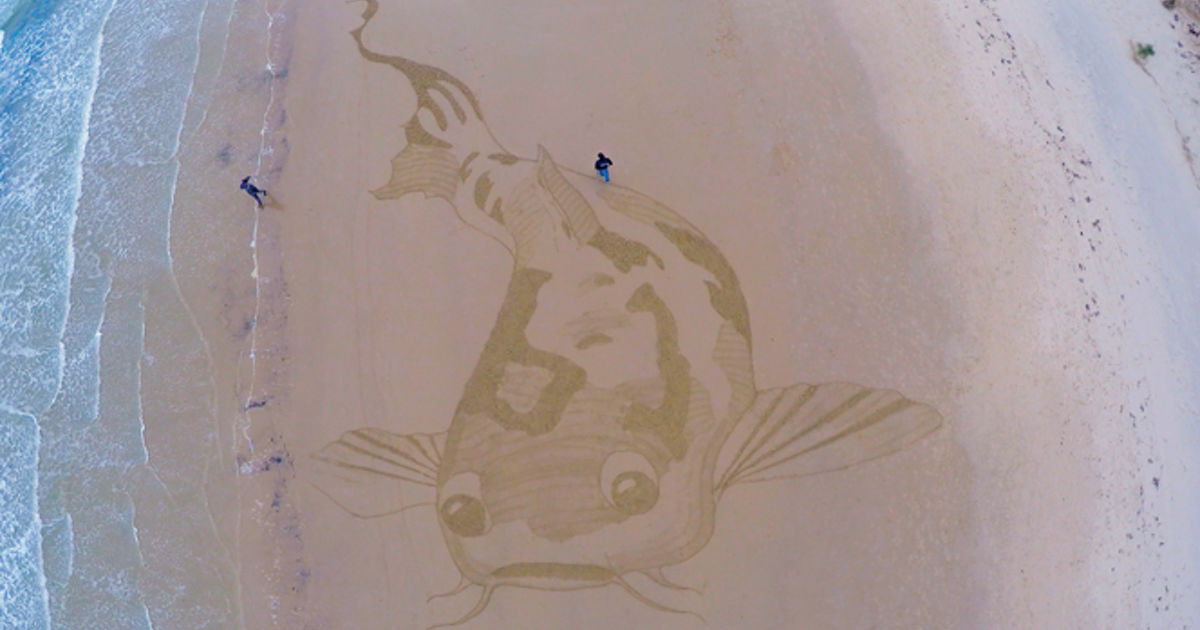 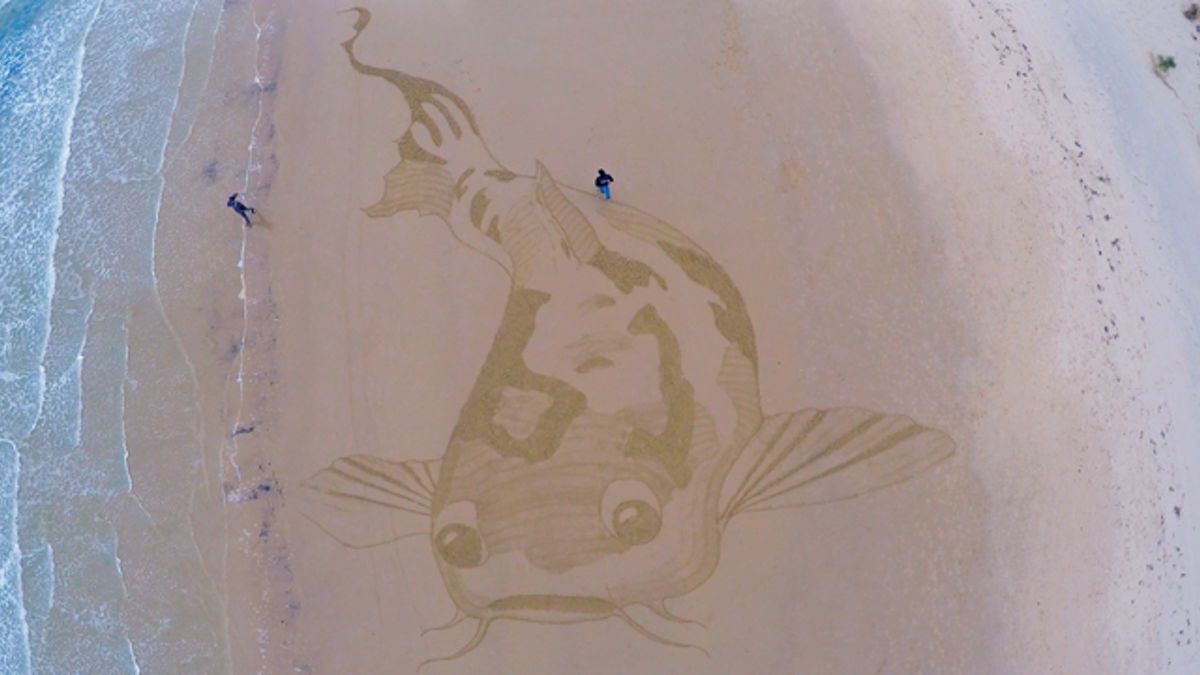