After last week's revelations around the working culture at BrewDog, Amy Kean examines why the move to appoint Mental Health First Aiders in the workplace isn't enough, and how things that sound good aren't necessarily doing good.

Mental Health First Aiding is the hottest new trend in the world of work. Everyone’s talking about it.

Becoming a Mental Health First Aider is the new building-a-school-in-an-African-town… it sounds good, but who are you helping, really?

Steve and Susan both get pretty busy at month-end, so try not to overwhelm them in the last week before payday. I know that not all of you have a working - or indeed any - relationship with Susan or Steve, but I would encourage you to open up and be honest with them about your mental health worries, should they approach you. As I say, they’ve done a two-day course.” I jest; really I do. Some of the nicest people I know are Mental Health First Aiders. If you’re unaware of the programme, it’s a two-day course that educates people on the range of mental conditions an individual may suffer from, and lots of companies are paying £300 a head for up to 16 of their staff to be schooled on the ins and outs.

Lots of work-based initiatives sound great. Especially when they’re described in an email from the CEO, and someone from the design team created a logo for it. But in corporate culture, the difference between sounding good and being good, the distance between announcement and reality, are significant. DON’T PRETEND YOU DIDN’T ALREADY KNOW THIS. Above: Some studies have shown no evidence that the introduction of MHFA training in workplaces has improved the wider management of mental ill-health.

When institutions and good intentions collide, certain things happen: initiatives generally become more about admin than outcome, paid work and clients take priority over extra-curricular stuff, people lose interest and most well-meaning programmes eventually fade, even if someone in the design team made a logo for it. Oh, and then there’s the effectiveness issue. In my experience (having sat on a number of leadership teams) big bosses aren’t too fussed about the effectiveness of such programmes. A short, swift PR announcement and job’s a good'un!

In my experience (having sat on a number of leadership teams) big bosses aren’t too fussed about the effectiveness of such programmes. A short, swift PR announcement and job’s a good'un!

I did some research into Mental Health First Aiding, because I had concerns. Unfortunately, my concerns were legitimate. According to a study conducted by The Health and Safety Executive (first in 2018 and then updated in 2021) “there is consistent evidence that MHFA training raises employees' awareness of mental ill health conditions. There is no evidence that the introduction of MHFA training in workplaces has resulted in sustained actions in those trained, or that it has improved the wider management of mental ill-health.”

Crikey. Although, the same could be said of diversity training, because there’s decades-worth of studies showing it can make things worse, by creating an illusion of progress. And that a lot of bias tests are misleading, because they only count for 4% of an individual’s behaviour. And according to a 2020 study, we’re often preaching to the converted because many white men feel alienated by diversity training and believe they are “too busy” to get involved. 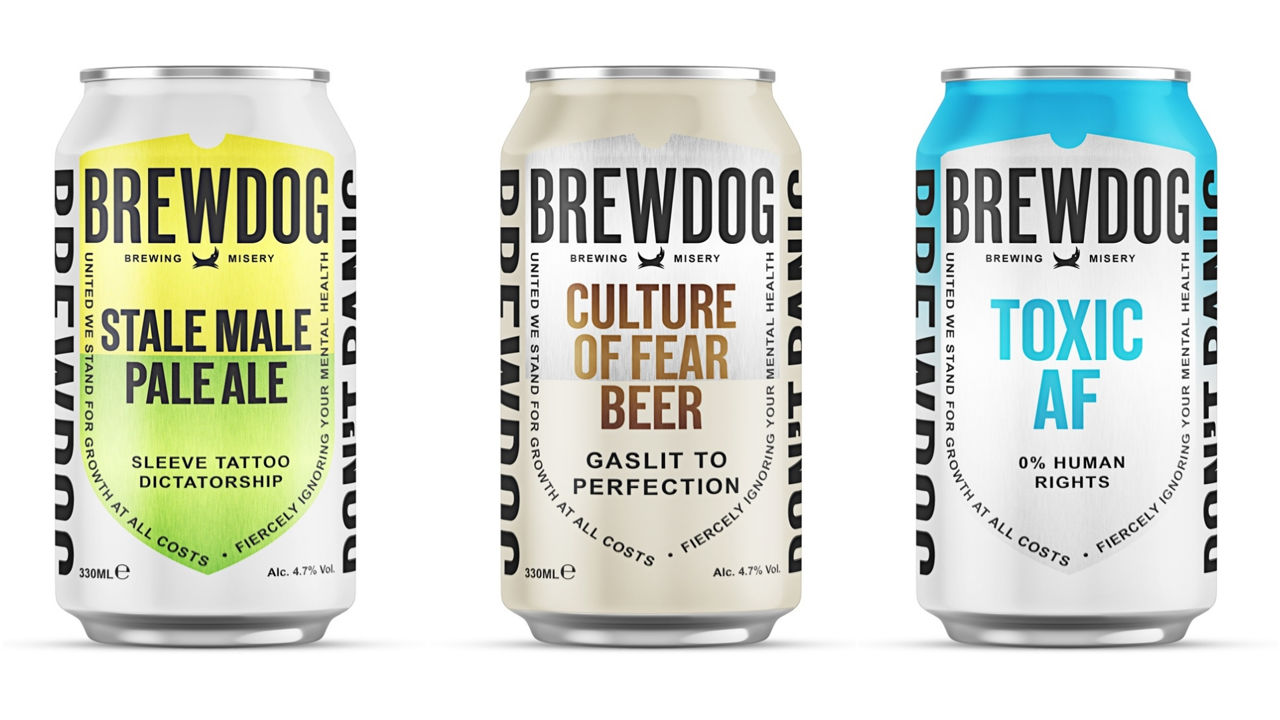 Above: BrewDog were accused recently of fostering a "culture of fear" in an open letter from former employees. London agency Don't Panic created the specialised cans in support of Punks With Purpose.

I recently had a long conversation with a former colleague and Mental Health First Aider who was very distressed. He told me that the culture of his company had worsened; he was feeling under too much pressure to help others, and none of the terrible deadlines or extreme working hours that were causing widespread stress had seen improvement. But who First Aids the Mental Health First Aiders?

None of this is straightforward. Mental Health First Aid isn’t the same as physical first aid. The oversimplification of the brain, comparing the afflictions therein to a cut or a graze, is common yet dangerous. Physical First Aiders are required at work to deal with accidents that happen at work. The more unsafe the work environment, the more proactive protection there should be, i.e. hard hats on construction sites. There is context, there is adaptation, there is complexity.

None of this is straightforward. Mental Health First Aid isn’t the same as physical first aid. The oversimplification of the brain, comparing the afflictions therein to a cut or a graze, is common yet dangerous.

BrewDog has Mental Health First Aiders. They also boast a wellbeing strategy that includes “pawternity leave”: time off when you get a new dog. Although, according to an open letter signed by a number of former BrewDog employees last week (and anonymously signed by some) very few people are actually allowed to take pawternity leave: instead it’s merely a sentence that sounds good on job listings and LinkedIn posts.

The open letter, shared by a group called Punks with Purpose detailed an overriding culture of fear. If you haven’t already, read the letter because it’s damning in its entirety, but this is perhaps the most heartfelt portion:

“So many of us started our jobs there eagerly, already bought into the BrewDog ethos, only to very quickly discover that “fast-paced” meant “unmanageable”, and “challenging” meant “damaging”. Some people (no names, but as a group we know who they are) quickly discovered that this could be exploited, and allow them to treat other staff however they liked without repercussions – making them feel belittled and/or pressured into working beyond their capacity, and often eventually feeling forced out of the business – because that was perceived as the way the company operated, and if we didn’t like it, we should leave.” Above: If companies really want to help with their employees' mental health and wellbeing, they need to do as well as say.

Despite a number of perks, MHFA and wellbeing initiatives, a toxic environment grew and mutated. The founders - in particular James Watt - were accused of exaggerating (and in some cases fabricating) a lot of their actions, purely for positive PR, whilst their employees suffered. In response to the open letter, James Watt announced on LinkedIn that they’ll be sending an anonymous survey to staff to investigate. Job done then, right? Case closed. Job’s a good'un.

Just because a company has initiatives that sound good, it doesn’t mean they do good.

Just because a company has initiatives that sound good, it doesn’t mean they do good, and we have to get better at looking underneath the bonnet of corporate bullshit.  Making the mental health of your employees the responsibility of their colleagues feels very ‘industrial’. Very Dickensian.

When it comes to human betterment at work, I’m not saying STOP IT ALL. Of course I’m not. That would be silly. I’m saying PLEASE DON’T STOP THERE. You care that much? Train everyone. Sick of nervous breakdowns in the office? Spend your money on more resources. Worried about presenteeism? Treat your employees nicer. Or hire an unsackable Head of Accountability who makes sure you’re doing the things you said you’d do in press releases and open letters. Are there external auditors who ensure that companies fulfil their public promises? There should be.

You care that much? Train everyone. Sick of nervous breakdowns in the office? Spend your money on more resources. Worried about presenteeism? Treat your employees nicer.

Punks with Purpose had to take radical steps to draw attention to BrewDog’s negligence. They risked their reputations and livelihoods. They had to join forces so their voices were heard. How on earth did it get that far? We need more radical voices at work. More rebels, challenging the status quo and saying that a two-day course for 16 of your staff isn’t good enough. We need to get better at listening to radical voices, even if it feels uncomfortable. The less you listen to feedback the more you force people to take drastic steps, risking their reputations and writing open letters.

Listen to the voices before they come radical. If you really care about the wellbeing of your staff, empower all of them. Don’t just leave them on mute until it’s too late. 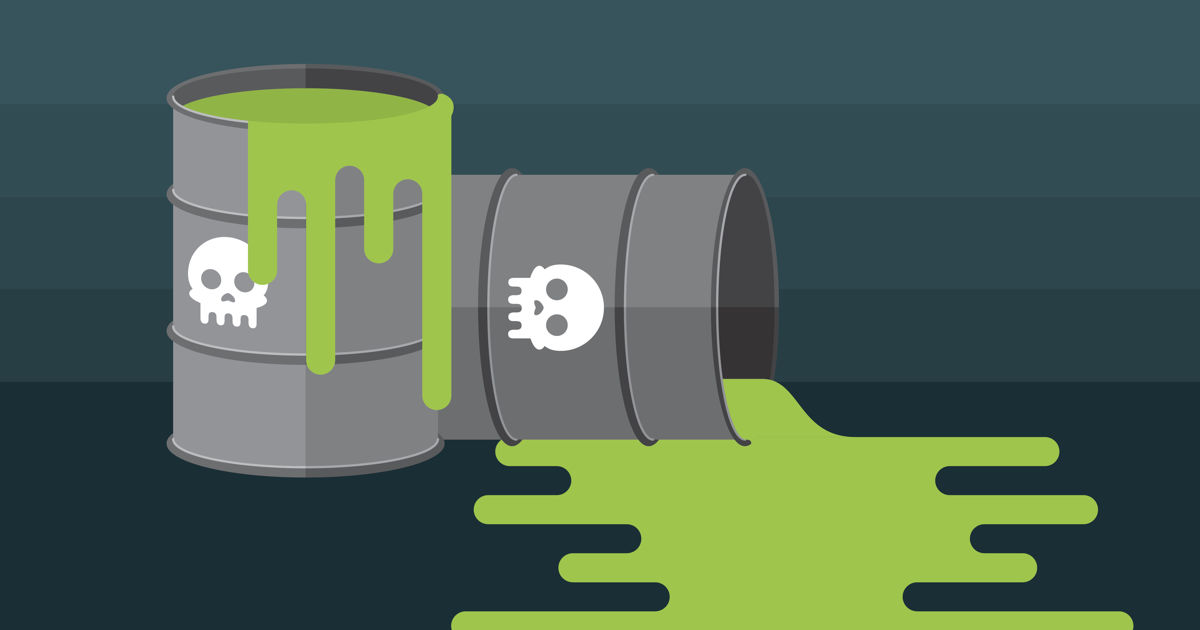