Nil points and flag shaggers: Can Brand Britain ever recover?

It's said that pride comes before a fall and, as far as Amy Kean is concerned, Britain has fallen a long way. From its government of 'pantomime villains', its 'panel show mafia' and annihilation at this year's Eurovision, the proud nation of Britain is in sore need of a rebrand.

Last week I had my first Covid vaccine, at the Science Museum in South Kensington.

It wasn’t the most convenient location for me, but OMG how iconic. Hopefully your immersive vaccination experience was as smooth as mine. The NHS texted, I booked two staggered appointments, turned up promptly, barely queued, interacted with chatty volunteers, signed forms, got jabbed, received a sticker, sang a verse of God Save the Queen to rapturous applause, sat down, read a book for 15 minutes and then skedaddled. Bosh!

Having my Covid vaccine at the Science Museum in South Kensington was the first time in a long time I felt proud to be British. But was I proud to be British… or was I proud of the NHS? The NHS that a 100-year old man had to fundraise for; the NHS that Tory voters mindlessly clapped on a Thursday; the NHS whose staff received just a 1% pay rise this year; the NHS whose workers will be dealing with Covid trauma for years to come. Upon reflection, as swiftly as the ache in my left arm faded, so too did the pride that’d momentarily swollen my stupid heart. Above: Amanda Holden [in-screen, top] delivered the UK voting results for this year's Eurovision Song Content, for which the UK received 'nil points'.

But I decided to give my home nation one more chance, as I sat down last weekend to watch some delicious bizarro-pop at Eurovision. "Bon Soir. Goedenavond,” announced Amanda Holden as she delivered the UK’s votes. “That is ‘good evening’ in French and Dutch. Although I've got absolutely no idea which is which!” Yeah, I’m definitely not proud to be British.

Britain managed to play the fool; effectively positioning ourselves as a tone deaf nil points nation.

“I love Eurovision!” Holden continued. "The drama, the excitement, and all the wildly over-the-top outfits - and that's just me!” Even at the Eurovision Song Contest; the weirdest, most confusing broadcast night of the year, Britain managed to play the fool; effectively positioning ourselves as a tone deaf nil points nation. But that’s… well, it’s just our brand, isn’t it? Rude. Arrogant. A refusal to speak 'foreign'. We’re the Main Character of the world. And that’s not a good thing, by the way.

Main Character Syndrome - think Zac Morris from Saved by the Bell, Phoebe Waller Bridge’s Fleabag or Carrie in Sex and the City - refers to an individual who believes they’re not only the main character of their own life, but the protagonist in all life. Every conversation, situation, drama, debate; they are front-and-centre, tout le temps (whatever that means). Described as a form of narcissism (but, like most modern ‘syndromes', is based on little else than pop psychology) Main Character Syndrome has been popularised by funny, young peeps on TikTok and the hashtag, #maincharacter has over 1.2 billion views.

What Brand Britain has historically relied upon since the dawn of time, is that we’re the Main Character. And it’s worked. Until now.

Next time you’re at brunch, or on a Zoom, try to spot the protagonist. They’ll make every agenda item about them, taking the conversation into a variety of drastic directions that somehow all end with a story about how a stranger gave them a compliment. What Brand Britain has historically relied upon since the dawn of time, this teeny tiny island filled with fuckwits, is that we’re the Main Character. And it’s worked. Until now. Above: Zac Morris from Saved by the Bell, Phoebe Waller Bridge’s Fleabag and Carrie Bradshaw in Sex and the City are good examples of Main Character Syndrome.

Somehow, we managed to ride the dirty wave of our dark colonial past for centuries. But, finally, due to a potent combination of Brexit, Boris Johnson and half our inhabitants’ rabid obsession with the Union Jack, Britain has become an offensive and pathetic entity. The international equivalent of a bad reality TV show.

How has Britain responded to its international image problem? It got more British.

After four years of “wE wAnT oUr CoUnTrY bAcK”, we got it back. Khadija Patel, Editor-in-Chief of the Mail & Guardian newspaper in Johannesburg, spoke for everyone when she said: “There’s a gleefulness in watching the British realise the ineptitude of their own politicians.” 64% of UK business leaders feel Brexit has weakened Brand Britain significantly*. Even the BBC’s imploding, for crying out loud.

So, how has Britain responded to its international image problem? It got more British. A Crosse & Blackwell survey from a few months ago found that more than half of Brits are looking to buy more domestic food and produce this year, following the UK’s departure from the EU. Nearly two thirds considered it a ‘logical choice’. The knee-jerk reaction amongst British traders has been to whack red, white and blue on packaging and promos; puking the Union Jack over every supermarket shelf. Political commentator Marina Purkiss clocked the self-love on a recent trip to Morrisons.

The knee-jerk reaction amongst British traders has been to whack red, white and blue on packaging and promos.

Said Purkiss: “The Union Jack is having its moment. From memory, the flag would make a proud but infrequent appearance alongside things like royal weddings, VE Day street parties or, if you’re unlucky, a British holidaymaker’s swim shorts. Skip to today though, and the reality is quite different. Government ministers dare not join Zoom calls unless their flags are pompously erected in their downstairs libraries. But supermarkets and their suppliers, too, have been keen to join in the jolly jingoism. Butter, scones, even petits-pois all now come emblazoned with nothing but the big, bold British flag. What’s wrong with giving support to our British farmers? will be the line of defence from furious ‘flag-shaggers’. I’m all for that. A nice little flag on a pack of eggs, next to say… a chicken? But what do I know?” 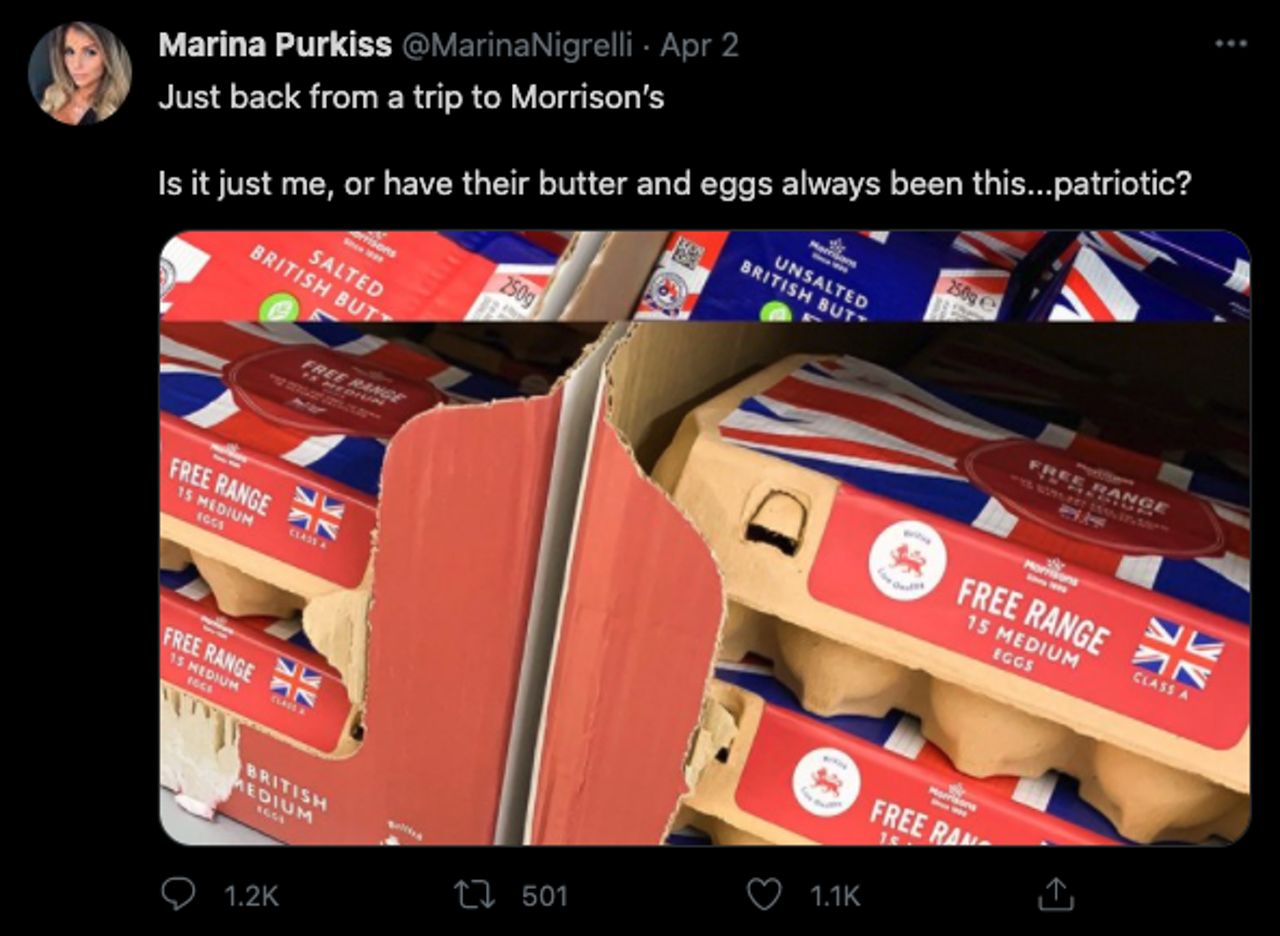 Above: Political commentator Marina Purkiss tweeted about the red, white and blue overkill on boxes of eggs at a supermarket.

Instead of attempting to integrate, the UK is doubling down on its arrogance and chronic separatism. But, with our flag rapidly losing social currency, surely it’s common sense to even the most basic marketer that Britain needs a rebrand. A touch of humility, maybe. Empathy. Kindness. To relaunch the brand, we need to make it as little like Britain as we possibly can.

Surely it’s common sense to even the most basic marketer that Britain needs a rebrand.

Now is not the time for Union Jacks. Now is the time for substance. According to the WIPO innovation index, the UK is the 3rd most innovative nation in the world when it comes to creativity, knowledge and technology (behind Sweden and Switzerland). What is great about Britain is the stuff we make and do, not the stuff we say. Not the countries we fucked, and the really bad football we play.

The creativity and originality that Brits are capable of; the strength of our NHS; our great scientific minds; our diversity, needs to be our story. The Science Museum in South Kensington is proof of our legacy of innovation, so if we could shut the hell up for five minutes and innovate our way out of this goddamn identity crisis, that’d be great, Britain.

We may never again get douze points,  but at least we can save our gracious face.