How Tony Hawk helped create the sound of skateboarding

To kick off this month's Music & Sound special, we talk to directing duo Bonamaze who recently created a film sampling skateboard sounds.

Duo Gilad Avnat and Stav Nahum, a director and an editor and sound designer respectively, make up the Tel Aviv-based directing team, Bonamaze.

They started out as musical producers and dual percussionists working with DJ's and performing all over the world, which informs their connection to beats and rhythm in music, which is prominent in all of their work.

In 2013, after creating interactive video exhibits for NICE Co. in Orlando, they fell in love with the world of video and decided to officially shift their focus from live performances and music to the filmmaking. In a very short time they've become specialists in the field of rhythm and groove as seen in various projects for Coca-Cola, Sprite, Snickers, M&Ms and others.

Recently, the team created a short film with legendary skateboarder Tony Hawk which uses sounds created by the skateboard itself, or by noises associated with its use. The short, called, naturally, The Sound of Skateboarding, is a brilliant encapsulation of the sport and a perfect example of the power of sound.

Below, the duo explain the processes behind the film and why sound and sound design can sometimes be overlooked.

Where did the idea for this film come from?

The idea for this piece came to us about four years ago. We even did a pilot test version with a local skateboarder. We had also been through steep learning curves from a lot of previous musical projects in this style, so when we felt that we were properly prepared we reached out to Tony Hawk's manager and pitched him the idea.

Tony immediately got the viral potential and the project's originality, and so he invited us to California to create the project with him and other skateboarders.

The hard part was to create the music or to make them all sound as one whole beat, which keeps evolving throughout the clip.

Is there an agency/client involved in this?

The brand/client was TonyHawk.com. Tony is also the owner of Birdhouse Skateboards and he's the founder of a charity called TonyHawkFoundation.org which helps build skate-parks all over the US, mainly in low income or under privileged areas.

It was very important for Tony that our project would reach the international extreme-sport community and that the piece would be presented as a quality video and not as a commercial for his skateboarding brand (which was anyway featured in the film). 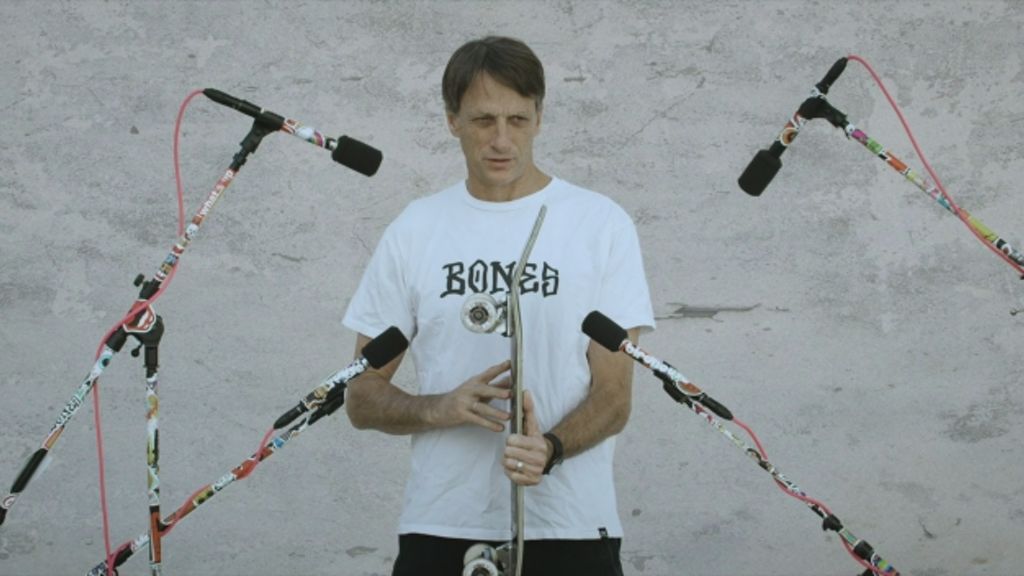 How did you decide which sounds you wanted to use?

The sound clips all sounded amazing. The hard part was to create the music or to make them all sound as one whole beat, which keeps evolving throughout the clip. We see picture and sound as one piece, not as separate entities. They need to look and sound harmonious together as a unit. If either one doesn't work – we try other options throughout our creation process until it does.

After deciding which sounds were a must for the clip, we went and researched which of these sounds are produce-able and how we can turn them into music.

How much research did you do into what sounds were available via skateboards and skateboarding?

All the sound clips were recorded on set, without purchasing a single sound byte from any sound bank. Our research focused on asking professional skaters all over the world what they thought were the things that make the skateboarding world unique, such as the sound of the board breaking or falling of the board.

Those are very distinguishing sounds for skateboarding and the essence of this world. After deciding which sounds were a must for the clip, we went and researched which of these sounds are produce-able and how we can turn them into music.

We call our style 'a visual soundtrack'. It's basically original music assembled from sound samples

Are you skateboarders yourselves?

Gilad has been a skateboarder since he was six years old... Stav has never skated a day in his life and has never even been interested in sports. But after our project with Tony he's become a true fan and rushed to buy a skateboard for his three-year-old son, who's been skating diligently for six months now with full protective gear and hasn't broken a single bone yet... How complex was the mic set-up when you were shooting?

The recording was relatively simple with five zoom mics that were placed very close to the source of each sound. For instance, if the shot was of a skater skating on a rail there were several hidden mics all across the rail, recording the whole motion, beginning to end. If this kind of layout wasn't possible we would simply ask the skater to do the shot over and over again until we got it all.

We realised that at that point we were no longer objective enough of our own creation. Our brains had to get an external ear and eye from other talented sound designers and directors.You have worked on projects like this before, haven't you?

Yes, we did over 12 projects using this type of musical style: from home design and baking to sounds of whole cities such as Berlin and Tel-Aviv. We came to Tony's project with lots of experience.

We call our style 'a visual soundtrack'. It's basically original music assembled from sound samples, which, along with precise video and sound editing, create the “visual soundtracks". We didn't come up with this style. We just improved and developed it over the years.

Can you tell us about the sound editing process; how complex was that?

The sound editing was slightly different from the ‘traditional’ way since we have to edit as we go; throughout the creation process we switch from video to sound editing and we skip from the music composition to the video editing- all simultaneously:

First, we sync between sound and image; Next, we compose the initial music in Final Cut Pro X; Then, we do the sound design on various sound editing software; Next, we switch back and forth between the sound software, the video editing and the finishing touches; Lastly, we mix.

To be frank, our biggest challenge was scheduling Tony Hawk.

We created two different mixes and we send them out to many colleagues asking which version they thought worked better, testing each version on their mobiles and laptop. We eventually go with peoples’ favourite, since we realised that at that point we were no longer objective enough of our own creation. Our brains had to get an external ear and eye from other talented sound designers and directors. 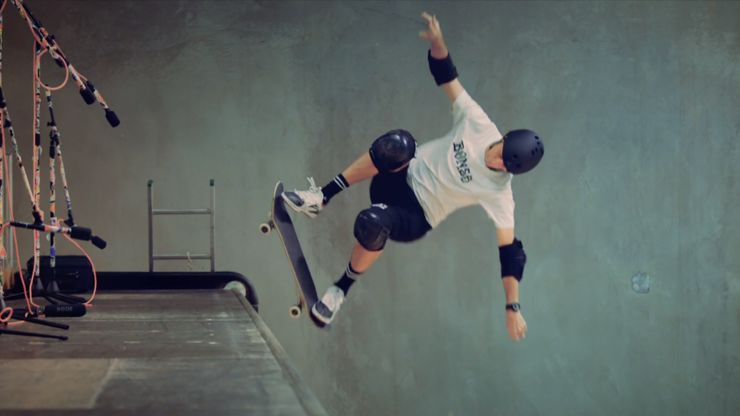 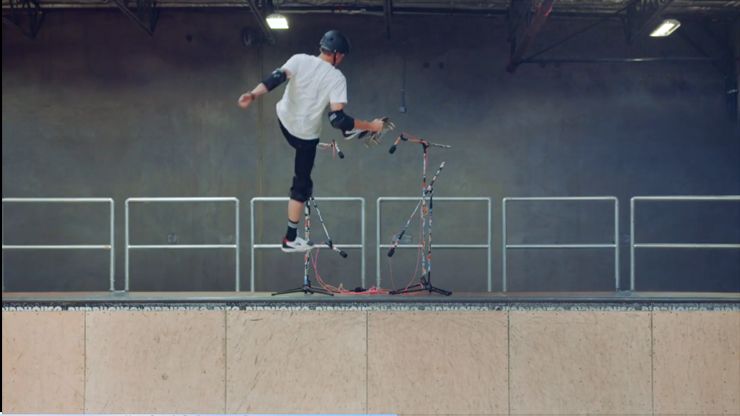 Above: The mic set up as Tony Hawk takes to the ramp.

Do you think sound is underused, or under-appreciated, in film and especially in commercial filmmaking?

Absolutely. Sound is no doubt less appreciated in commercials. Unfortunately, sometimes the sound design is left in the bottom of the production's priority list and so the sound designer is forced to work on a commercial's final version that is often signed and sealed to any changes. They can try and do their magic but sometimes it's simply too little too late.

Sometimes the viewer and the client don't understand how important sound is.

We are grateful to have the option to work on and combine directing with editing and sound in our projects starting from the very first stages. Thus, we get to give the sound design its adequate importance, just as the filming, which, in our eyes, are just as equal.

Sometimes the viewer and the client don't understand how important sound is and if the client sees a ‘perfect piece’ they will automatically start by asking who shot it or who edited it... but in reality, the sound designer had a greater role on the final outcome and they helped to reach that perfection, although their work is usually felt only on the subconscious level.

How long did it take to create the spot? In total it took two months since our first day of shooting until the spot came out. If anyone is actually interested this was our timeline: 5 days of shooting in San Diego 14 days of editing 4 days of sound and image sync 10 days of music scoring/sound design 9 days on online editing (colour, titles, etc.)

What was the biggest challenge you faced?

Well, to be frank, our biggest challenge was scheduling Tony Hawk. Over the course of three months, there was just one single day in which he was available to shoot in between his travels and international flights. Other challenges had to do with sound but they were relatively easily solved thanks to the time and love, which we put into this project.

Bonamaze are repped for commercials and branded content by Joyrider Films. 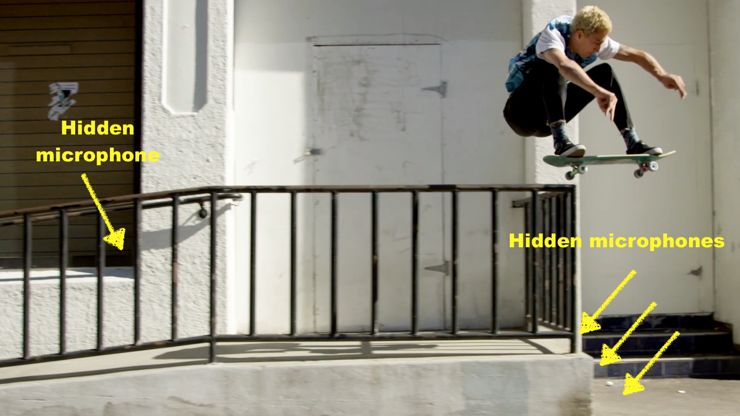 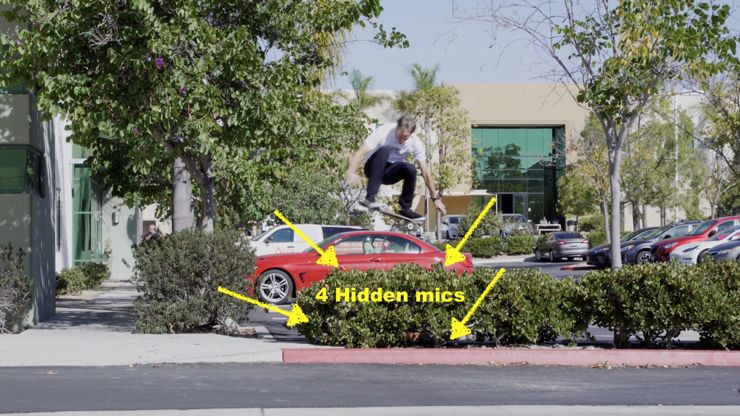 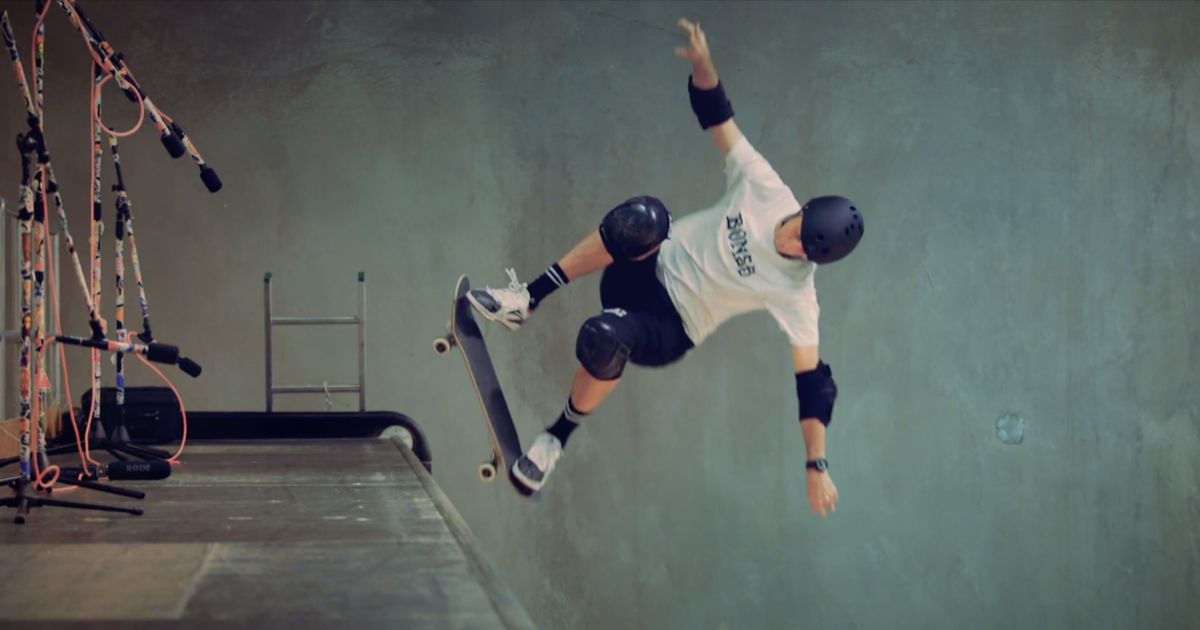 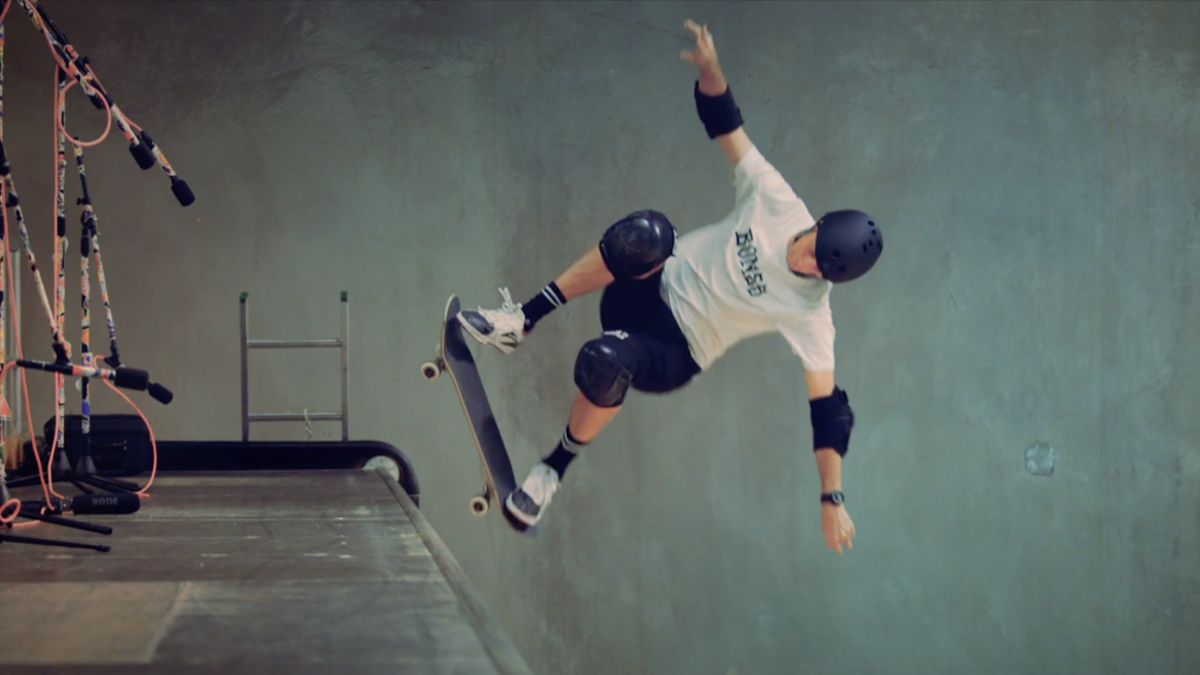